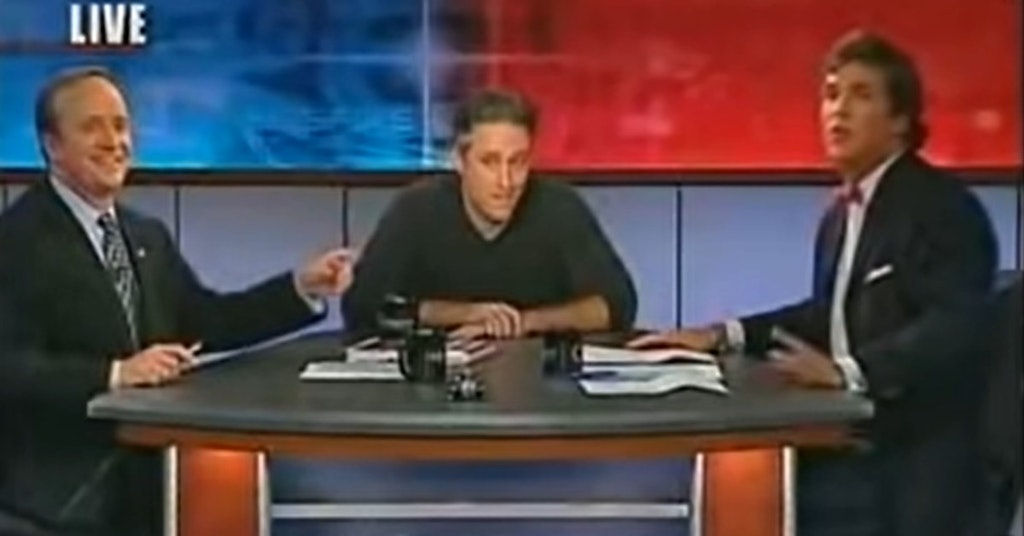 Following his triumphant victory in securing lifetime healthcare benefits for 9/11 first responders, Jon Stewart has come forward to address an interview in which he called Fox News host Tuck Carlson a d-ck. After Carlson angered just about everybody by calling pregnant soldiers “a mockery” of the U.S. military, Stewart decided to apologize to penises everywhere.

“I called Tucker Carlson a dick on National television,” he tweeted. “It’s high time I apologize…to d-cks. Never should have lumped you in with that terrible terrible person.”

Ever ahead of his time, Stewart made the statement in 2004 on CNN’s CrossFire, which at the time employed Carlson and co-host Paul Begala, telling them to their faces that they were “partisan hacks” who were “hurting America.”

“You have a responsibility to the public discourse, and you’ve failed miserably,” he said to Carlson.

“You need to get a job at a journalism school,” Carlson shot back.

“You need to go to one,” replied Stewart.

After a lot of back and forth between Stewart and Carlson, the big hit comes soon after the 12-minute mark after the bowtie-wearer says “I do think you’re more fun on your show, just my opinion.”

You can see the smirk forming on Stewart’s face as he makes the decision to drop the d-word.

“You know what’s interesting, though?” he says. “You’re as big a d-ck on your show as you are on any show.”

The moment was so iconic that Begala wrote an op-ed for CNN 11 years later titled “The day Jon Stewart blew up my show.”

“My wife, truth be told, rarely watched ‘Crossfire,’ but she rarely missed ‘The Daily Show,'” Begala admitted. “By the time Stewart finished disemboweling my show, I was hoping she wasn’t watching.”

CrossFire was canceled soon after the aforementioned disemboweling. Stewart, meanwhile, only joined Twitter in late January of this year and already has over 1.1 million followers. He is only following one account himself, and yes, it’s Arby’s.

His apology to d-cks gained over 160,000 likes in under 24 hours, and it brought comfort to a few specific individuals out there who really needed the joke to go in their favor for once.