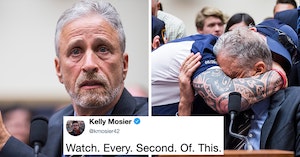 Former Daily Show host Jon Stewart choked up and slammed Congress as “shameful” in Washington, DC, on Tuesday, while calling out lawmakers who didn’t sit through a hearing that would protect health care benefits for 9/11 first responders.

“As I sit here today, I can’t help but think what an incredible metaphor this room is for the entire process that getting health care and benefits for 9/11 first responders has come to,” said Stewart. “Behind me, a filled room of 9/11 first responders, and in front of me, a nearly empty Congress. Sick and dying, they brought themselves down here to speak to no one.”

The comedian appeared in front of the House Judiciary Committee to discuss reauthorizing the 9/11 Victim Compensation Fund (VCF), which provides benefits and healthcare to the September 11 survivors for the next 70 years. Stewart, along with a handful of ill first responders, gave an emotional testimony on why the fund should be extended.

In his speech, Stewart expressed frustration and dismay over the fact that half of the 14-member subcommittee members were absent during the hearing. He blasted Congress for their “callous indifference” and called their lack of care “a stain on this institution” and “an embarrassment to the country.”

“And you should be ashamed of yourselves, for those that aren’t here,” continued Stewart. “But you won’t be, because accountability doesn’t appear to be something that occurs in this chamber.”

Jon Stewart testifies for September 11 Victim Compensation Fund: "Accountability doesn’t appear to be something that occurs in this chamber…I'm sorry if I sound angry and undiplomatic, but I am angry, and you should be too." pic.twitter.com/njxJzSmzSJ

The comedian went on to add that the people present did not want to be there anymore than the missing lawmakers.

“None of these people want to be here,” said Stewart, noting that the first responders who showed up to the hearing “are not here for themselves” but rather to protect other survivors’ access to healthcare.

“More of these men and women are going to get sick and they’re going to die, and I’m awfully tired of hearing this is a ‘New York issue,'” said Stewart. “Al-Qaeda didn’t shout ‘death to Tribeca.’ They attacked America.”

Stewart is right and it’s insane that he’s still fighting this fight 18 years after 9/11. https://t.co/tt9kHA2Ara

PUT THIS IN MY VEINS. https://t.co/mU1apCVa7P

Please everyone who lives in America. Watch this. And tell everyone you know to watch this. Then everyone call your congresswoman or congressman and tell them to do the right thing. https://t.co/NUPtVvAeuO

There is what Yeats would call “a terrible beauty” in Jon Stewart’s eloquent anger at Congress today. https://t.co/XowEhn7Ge6

We need this man back on television. https://t.co/N3fk4omejb

He’s RIGHT. What a disgrace to make these heroes have to plead to not be abandoned by the absent representatives of the country they sacrificed their health and lives for. https://t.co/frVFASlmca

Every congressional sumbitch who failed to show up for this hearing (which the empty seats attest are many) should be forced to wear a shock collar & every time they utter “Remember 9/11” or “Never Forget” should be hit with enough voltage to make them shit their pants. https://t.co/xBs3puBNIf

Republican Rep. Mike Johnson of Louisiana responded that the missing members of Congress didn’t mean to be disrespectful and explained that he thought the bill would pass.

Stewart’s statement landed him a standing ovation. “They responded in five seconds,” he remarked, of the 9/11 first responders. “They did their jobs with courage, grace, tenacity, humility! Eighteen years later, do yours!”