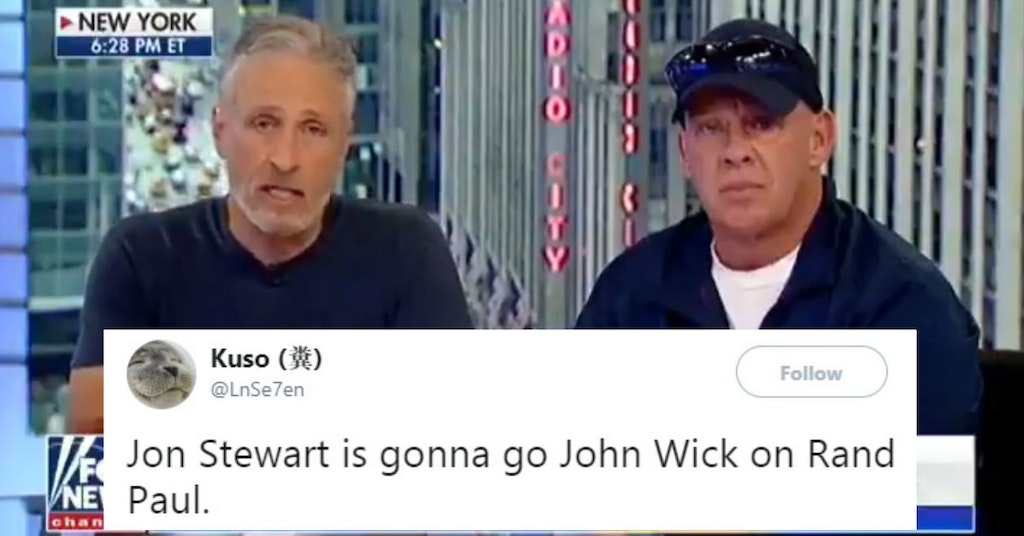 Jon Stewart, former host of The Daily Show, has been spending his retirement fighting to secure lifetime funding for the healthcare costs of the 9/11 first responders who risked their lives and breathed in dangerous chemicals following the 2001 terrorist attacks.

He’s already raked Congress over the coals for repeatedly dragging their heels on a bill to ensure funding for all of the responders’ medical needs—funding which is running out due to the fact that so many of them are developing cancer due to breathing in burning metal, electronics, and glass.

"These ill #FirstResponders will now have to travel back to DC with their hats in their hands to beg for their health care. This is an ABOMINATION!"

After years of fighting, Senator and presidential candidate Kirsten Gillibrand attempted to fast-track the bill due to the fact that 9/11 responders have already had their benefits cut by up to 70 percent as their medical bills pile up. However, Rand Paul derailed this effort by objecting based on the usual fake deficit hawk reason.

“It has long been my feeling that we need to address our massive debt in this country. We have a $22 trillion debt, we’re adding debt at about a trillion dollars a year,” he said. “And therefore any new spending that we are approaching, any new program that’s going to have the longevity of 70, 80 years, should be offset by cutting spending that’s less valuable.”

‘This is necessary, it is urgent, and it is morally right.’ — Jon Stewart compared congressional hypocrisy to competitive eater Joey Chestnut in his defense of the 9/11 first responders bill pic.twitter.com/bGmM5qWcMB

Rand Paul did not have the same opinion when he voted in favor of Trump’s multi-billion-dollar tax cuts for the rich, which is adding much more to the national debt than this bill ever could—something that Jon Stewart pointed out while calling Rand Paul’s actions “an abomination.”

“You know, there are some things that they have no trouble putting on the credit card,” said Stewart, “but somehow when it comes to the 9/11 first responder community—the cops, the firefighters, the construction workers, the volunteers, the survivors—all of the sudden we’ve got to go through this.”

“Pardon me if I’m not impressed in any way by Rand Paul’s fiscal responsibility virtue signaling.”

Jon Stewart is not the only one upset with Rand Paul right now, to the point that some people are tweeting the hashtag #RandPaulHatesAmerica.

@RandPaul thinks we have enough money to fund his rich friends pockets but not enough for the 9/11 victim compensation fund. Here's the number to his office: 202-224-4343 Twitter, do the damn thing! #RandPaulForgot #RandPaulHatesAmerica

As a Kentuckian, I'm one of his constituents, as such, I know that #RandPaulHatesAmerica

. . .he uses Kentucky as a platform for his own political agenda, not to represent us.

#RandPaulHatesAmerica Only a scumbag could vote for massive tax cut that explodes the deficit and then argue that 9/11 bill needs to be offset by spending cuts to avoid increasing national debt. There must be better people in this country that can serve in Congress with honor

Because Rand Paul believes money for billionaires or golf trips is ok, but not for heroes of 9/11. He did forget… #RandPaulForgot #RandPaulHatesAmerica https://t.co/EZrPs1ukwY

Sen. Rand Paul blocks 9/11 bill and then there's this:

"Rand Paul angles to become Trump's emissary to Iran." He doesn't give a damn about Americans yet he wants to handle foreign relations? Seriously?! https://t.co/A4dX0kotgO#RandPaulHatesAmerica

Trump would be tweeting while #FirstResponders would be running into burning buildings.

And our tax dollars would go to Trump’s luxuries, rather than those responders, in the end. #RandPaulHatesAmerica

Yesterday, Rand Paul blocked funding for #911firstresponders and victims compensation fund. How much lower can the Republican Party go? Abraham Lincoln must be spinning in his grave now.

thanks #RandPaulHatesAmerica for showing us that you and the GOP are scum hypocrites for giving Trillions from the #GOPTaxScam to Billionaires and nothing to heroes.

@RandPaul You and your fellow Kentuckian @senatemajldr are a disgrace to this country. FOR SHAME. You are no American. #KentuckyPoliticiansSUCK #RandPaulHatesAmerica #RandPaulForgot

Dear GOP: Protest is protected by the First Amendment, and does not mean one "hates America" or should be "sent back."

However, treason and obstruction of justice are illegal, and condemning 9/11 First Repsonders to death, that shows hatred. #RandPaulHatesAmerica

I mean if you didn’t know this by now… #RandPaulHatesAmerica
and has for a while. Aug 2018: https://t.co/gyVYcuF7Ub

As much as people hate Rand Paul, they love Jon Stewart for his fire.

Jon Stewart is really smart to go straight to Fox News to call out Rand Paul and Mike Lee for what they did to First Responders by denying a vote in the Senate on Wednesday.

Jon Stewart should run for something. We need more people like him in Congress yesterday. https://t.co/ufW7Ho5tdC

Mitch McConnell has promised that the bill will be brought to a vote before the Senate takes a recess in August.