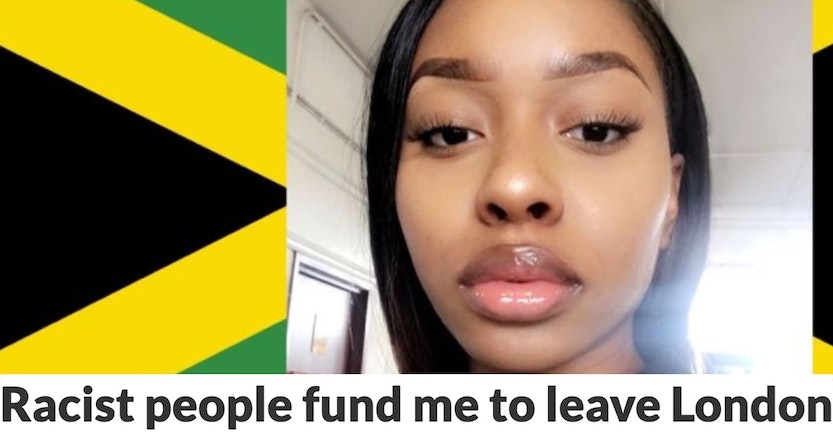 Racists say a lot of stupid things, but one of the most common idiotic refrains they like to spout out is to tell people to go back to their own country. Of course, this is often said without any awareness of whether the person they’re yelling at is actually from another country at all, and generally has way more to do with skin tone than anything else.

But another reason harassing people with demands that they return to their own country is dumb is that even if they are from another country, just casually moving across the world isn’t exactly a walk in the park. Even if you can be granted permission to live in various countries, those costs add up.

So one woman who’s sick of being the target of racists and this particular sentiment decided she had a good solution for the problem — she set up a GoFundMe for them to pay for her to move.

“I am a black woman who hates living in London due to the racist idiots who tell me to go back to my country,” wrote Jordene Phillips. “This Gofundme is for them. They want me to go. I will happily leave.

“The British Government brought my ancestors here and lied to them. Now I’m born in this crap. They see my island as a holiday destination but tell my people it is violent and evil. They have convinced young British born Jamaicans that there’s no opportunities there. Listen, I’m done talking init. PAY FOR MY TICKET DEN SINCE YUH BAD!”

Though Phillips’ fundraiser hasn’t turned up much money just yet (£222 has been raised of her £5,000 goal as of publication), her campaign has gone viral, largely thanks to people who say they can relate to her experiences and frustrations.

And though the donations may be few for the moment, people are already laughing thinking about how racists are approaching this situation.

The whole thing is also a little reminiscent of this Mean Girls meme that’s been making the rounds this year, poking holes in the demand that people leave the country if they simply don’t like how the people or the government are handling things.

Even if Phillips doesn’t end up with her racist-funded ticket to Jamaica, she says she’s been receiving all sorts of messages of support ever since posting her fundraiser.

“I can’t reply back to everyone because I’m very busy but I’m soo grateful for the kind donations and emails that have been sent to encourage me!” she wrote in an update. “Thank you all soo much! I really appreciate the love. Love will always win!”