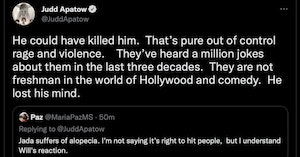 Director and writer Judd Apatow had a take on the Oscars slap heard ’round the world that many people found to be extreme, racking up quote tweets until he deleted the Twitter post that is now putting his name in headlines. It lives on in screenshots, of course, and people are continuing to discuss whether or not there is any possible way that the Will Smith slap could have killed Chris Rock dead.

“He could have killed him,” Apatow opined. “That’s pure out of control rage and violence. They’ve heard a million jokes about them in the last three decades. They are not freshman in the world of Hollywood and comedy. He lost his mind.”

People largely appear to doubt the idea that a single slap could be fatal and have reacted negatively to Apatow’s tweet, with reactions ranging from mockery to accusations of racism. The U.S. in particular has a long and storied history of painting Black men as extremely violent and capable of murder as a way to justify the countless atrocities committed upon them by the white people in power. This has often taken the form of claiming they are “out of control.”

Others took issue with the tweet due to the fact that Apatow has a long history of working with actor James Franco, who has repeatedly been accused of committing violence against women, including sexual assault.

Apatow has not yet remarked on the deleted tweet or any reactions to it.

Smith apologized for slapping Rock in retaliation for an offensive joke about his wife, Jada Pinkett Smith, and her hair loss due to alopecia, during his acceptance speech for his Oscar for best actor in the film King Richard. It was a highly emotional speech as Smith cried and spoke on feeling as though his role is now to protect those who are less able to protect themselves.

While Oscars host Chris Rock didn’t seem particularly upset about the slap himself, let alone injured or near death, and the actors reportedly made up behind the scenes after the awards show was over, people are still very much freaking out about it. Apatow is not the only one who has suggested it could have been fatal and the incident has launched entire cultural discussions over how we view violence and how that view changes depending on who commits said violence.

While most comments on the slap have either taken the side of “violence is never okay” or argued that it can be okay in certain circumstances, such as in self-defense or in defense of another person, there have also been a cascade of objectively bad takes. The prevailing opinion seems to be that Apatow’s tweet was a bad one that did not take into account the history of anti-Black racism in the U.S. and abroad.