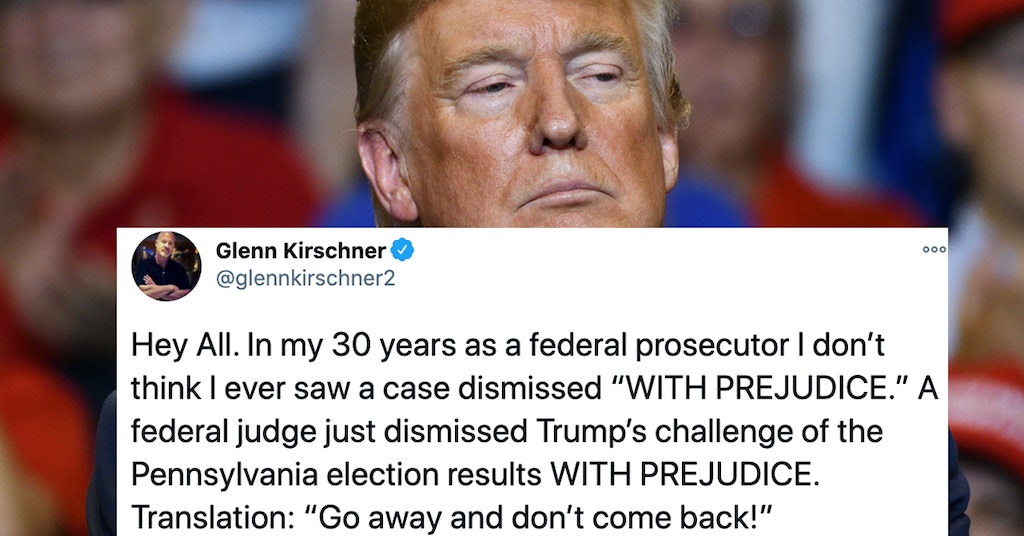 
President Trump’s attempt to invalidate the results of the 2020 presidential election by getting ballots thrown out in various states that could tip the scales in his favor continues to fail.

On Saturday, a Republican judge dismissed one of the Trump campaign’s major lawsuits, which hoped to see all 7 million votes cast in Pennsylvania invalidated. The theory was that because Pennsylvania allowed counties to decide whether or not defective mail-in ballots could be “cured,” voters in counties that opted out of ballot curing were disenfranchised.

The Pennsylvania lawsuit was always considered a long shot, but Brann made it absolutely clear that he thought the whole thing was a waste of time.

"One might expect that when seeking such a startling outcome, a plaintiff would come formidably armed with compelling legal arguments and factual proof of rampant corruption, such that this Court would have no option but to regrettably grant the proposed injunctive relief despite the impact it would have on such a large group of citizens,” he said in his decision. “That has not happened. Instead, this Court has been presented with strained legal arguments without merit and speculative accusations, unpled in the operative complaint and unsupported by evidence.”

The case was also dismissed with prejudice, meaning Trump’s personal lawyer Rudy Giuliani can’t reach into his legal briefs and come back to try again.

“It is not in the power of this Court to violate the Constitution,” Brann wrote.

Of course, Trump angrily tweeted an attack against him, along with the insistence that he would appeal the decision.

Trump’s campaign has filed dozens of lawsuits in key states that ultimately voted for Joe Biden, alleging fraud in public while often privately having to admit in court that they don’t actually have any evidence to do so.

The Pennsylvania lawsuit marks at least the 30th to either be dismissed or withdrawn, with only two cases providing Trump any sort of win. Neither is enough to have any sort of impact on the results of the election.