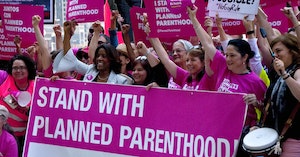 On the very day that the last health clinic offering abortion services in the state of Missouri was set to have its license expire, a judge has granted a temporary restraining order blocking the state from closing the last-standing Planned Parenthood. Rampant anti-abortion legislation intended to make it difficult to impossible to function as an abortion clinic have seen the vast majority of them close down in states like Missouri. By doing so, these states are pushing hard up against Roe v. Wade, which specifies that abortion must not only be legal, but reasonably accessible to the people.

It’s bad enough having only one of these clinics in an entire U.S. state. For Judge Michael Stelzer, closing the last one at least needs to be properly discussed first.

NEW: A judge in Missouri has blocked an attempt to shut down the state's last remaining clinic that provides abortions. https://t.co/9vlygDwxmw

A hearing for a preliminary injunction request is scheduled for June 4. Judge Stelzer’s restraining order keeps the clinic open at least until then.

Planned Parenthood and the state of Missouri are currently in a legal battle over the state’s extreme requirements for clinics that provide abortion services to remain open, including demanding to interview seven of their doctors. Five of the seven doctors the state wants to “interview” for some reason aren’t even employed by Planned Parenthood and are also concerned that due to the state’s ever-changing legal regulations, an interrogation could open them up to legal troubles.

So Planned Parenthood can’t force these doctors they don’t actually employ to submit to an interrogation by the state, but if they don’t do this thing which is impossible, Missouri will shut them down. This is all because of an alleged “patient complaint” that the state refuses to give Planned Parenthood any information about, but it allegedly about a medical procedure that is one of the safest you could ever experience.

This latest ruling is a small victory in the face of massive ridiculousness, but Planned Parenthood and their allies are celebrating nonetheless.

Sweet!! I'll still get to flip off PP protesters on Saturday mornings.

Thanks to everyone fighting for women's rights!!! ????

That’s great to hear! People can continue to get the care that is best for them and their families! I hope it continues! Good on that judge!

Thank goodness! Stay out of our business-Government!