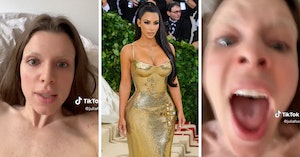 Julia Fox is seemingly coming to Kim Kardashian’s defense after the reality star caught heat in relation to the ongoing Balenciaga controversy.

The brand came under fire for a jarring ad campaign showing children holding handbags that looked like teddy bears wearing bondage gear. High fashion brands frequently push the line towards the bizarre and uncomfortable, and for some people, this particular campaign went too far. The controversy blew up even more when conservatives pushed past the images themselves and started going conspiracy theory about hidden messages and demon worship.

Calls for Kardashian to denounce the brand followed, as she has frequently worked with them in the past. Even after she did so, the condemnations of her association continued.

Fox took issue with this, and went on TikTok to explain that, although she personally found Balenciaga’s campaign “horrific,” she felt attacking Kardashian and other women who have worked with them in the past was misguided.

“I couldn’t help but think, damn, the women who are associated with the brand professionally are getting so much pushback. It’s almost as if they’re the f—king child molesters,” she said.

Responses to that were mixed, although some appreciated Fox redirecting the blame to where it belonged.

“Thank you I’m seeing Kim get more backlash than the man who created the whole campaign,” wrote @toastie24.

“I’m seeing people asking the models/celebrities who have worked with them to apologize?” @peytonjord agreed. “for what exactly? they were not the creatives behind it?”

Several also suggested that Kim could be sued for breach of contract depending on what she decided to say on the matter, while others fired back that “it is important that people be held responsible for the brands they align themselves with.”

Seemingly addressing that the majority of the outrage against the campaign is coming from conservatives, Fox also went on to point out that as “sick” as the ads made her, no children were harmed in them, whereas “millions of children are harmed in the church” — but nobody is calling to “cancel” that.

That obviously brought backlash on Fox herself, who then uploaded another video addressing the “f—kfaces” who love to scream about “all the pedophiles in Hollyweird.”

One viewer fired back with a claim that “the only difference is that Hollywood sets the example for the rest of the world” and that “the platform they have is the issue,” and while there are actually some points to be made in regards to that, it’s just as easy to bring things right back to the church and the gripping influence they hold over the United States.

“If you don’t think the church is a corrupt billion dollar industry MUCHHH larger than Hollywood, you need to do some serious digging,” @katiesuki replied.