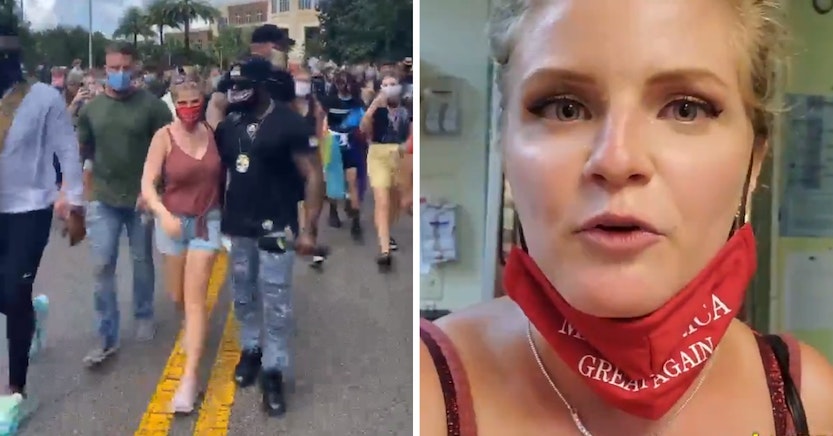 Kaitlin Bennett, also known as the Kent State gun girl, still apparently cannot resist taking her microphone to college campuses to attempt to get “gotcha” clips from students she assumes are liberal. This time, during a foray onto the University of Central Florida (UCF) campus, students made it clear that they were not in the mood for her shenanigans.

According to reports, she was first confronted by students for not wearing a mask in defiance of UCF rules.

According to an official statement put out by UCF on the incident, Bennett and her camera operators and “security” eventually agreed to put on masks while they went around bothering students. The university even defended her right to free expression, which they said includes the right to protest their own mask policy.

In spite of this, Bennett called university leadership liars and claimed that it was the students who had violated pandemic policy.

Students weren’t done with Bennett even after masks were donned, however, and a crowd of them ended up practically chasing her and her team away. Footage was captured of the students yelling at her to leave as she rushes away and one of her security team can be seen shoving multiple people.

According to those who were there, Bennett ended up fleeing into a campus bagel shop called Einstein Bagels where she hid while her security continued to shove the students outside, causing one young man to fall to the ground, before blocking the doors.

One student apparently managed to get into the bagel shop or was already in there before Bennett’s security started blocking entry and claimed that the pro-gun Trump supporter had barricaded herself inside the store’s electrical room. The camera pans over the interior of the shop and Bennett is nowhere to be seen.

Though it hasn’t been confirmed that she ran into the electrical room at any point, she did post her own response video that appears to be in the kitchen area of Einstein Bagels as she complains that “they” chased her in there. She calls on campus police to “do their jobs,” whatever that means.

Police across the nation, including in Florida, have been caught on film brutalizing protesters in the months following the eruption of civil unrest after the police killing of George Floyd.

“President Donald Trump, defund this school,” she shouts into the camera. “They wanna talk about defunding the police? Defund public education, defund public universities, take the funding away from these people.”

Bennett appears to have safely escaped the bagel shop.