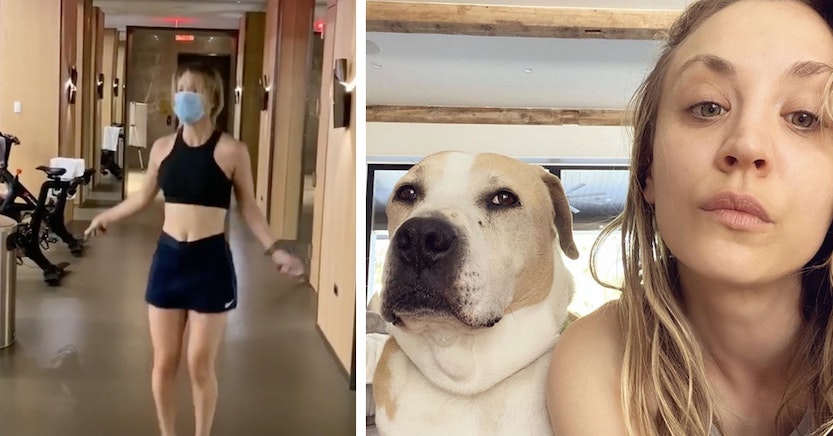 The thing about anti-maskers is that so many of them aren’t satisfied by just refusing to wear masks themselves, they want to force everyone else to stop wearing masks, too. It pokes massive holes in the claim that refusing to mask about is about “freedom” and reinforces the idea that too many people believe that American freedom is about forcing everyone to behave and exist exactly the same way they do.

Kaley Cuoco experienced that oddity firsthand last week after sharing a video of herself exercising on Instagram.

The minute-and-a-half long video features the actress engaging in what she calls her “newest obsession during COVID/quarantine” — jumping rope. Another person is clearly running the camera and they appear to be in a gym. And she’s wearing a mask.

The mask wearing didn’t sit well with some of Cuoco’s more invasive followers.

“No way would I train in a mask thats extremely dangerous never mind setting a very bad example for young girls and boys everywhere,” claimed one user, who ended his post with a clown emoji.

Others regurgitated some of the more familiar anti-masker misinformation, such as the idea that masks are dangerous because they lower your oxygen levels and only allow you to breathe in carbon dioxide.

Fortunately, Cuoco wasn’t interested in letting their comments slide by without adding her own.

While the World Health Organization is against wearing masks while exercising, any number of doctors have said it’s a perfectly good idea as long as you listen to your body and don’t push yourself too hard. There are even lots of suggestions for types of masks to wear to keep yourself and those around you healthy and safe while getting your workout in.

And clearly, Cuoco isn’t having any problems with her own exercise regime from wearing a mask. Those jump rope skills would make any kind on any playground jealous.