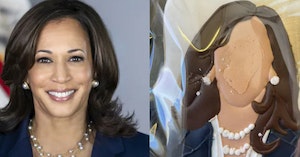 Republicans are really having to dig deep to find something to attack the Biden administration over, with the current president refusing even to wear the wrong color suit or put his feet up on a desk, and have therefore turned their rage upon the scourge of free cookies. After White House correspondent for USA Today Courtney Subramanian tweeted out a photo of said cookies, made in the likeness of Vice President Kamala Harris and delivered by same, right-wing figures went hard after the sweet gesture.

Although the cookies are perhaps a little strange looking without a face (the packaging squishing against the icing doesn’t help), nobody who actually received them seemed to complain. Perhaps somebody is jealous that they didn’t get any?

Other than the face, the cookies are rather gorgeous. Most people need professional stylists to get their hair looking that good, so kudos to the decorators. Some commenters have also claimed that they came from a Black-owned business that Harris was simply trying to support, though this does not appear to have been confirmed.

Rather than simply getting their own cookies, Republicans and various right-wing pundits made all kinds of wild accusations, claiming that they’re a sign of narcissism on Harris’ part all the way to comparing her to North Korean dictator Kim Jong-un. Others somehow managed to tie the timing of the cookie offering to the anniversary of D-Day, accusing Harris of disrespecting the troops by giving some semi-fancy sweets to hard-working journalists.

None of them seemed to have any recollection of the time when they displayed a literal golden idol of Donald Trump or that time when the former president started signing copies of the Bible. Others complained that public tax dollars may have gone into the purchase of the cookies, though this has not been confirmed, and even if it was would likely represent a piddling cost compared to the security expenses required to shuttle Trump back and forth to Mar-a-Lago every weekend, for starters.

More important than the confections was the destination of the flight where they were handed out. Harris was on her way to Guatemala to meet with leaders on the topic of the migration of the nation’s citizens to the U.S. A large proportion of Central American refugees coming to the U.S. border are from Guatemala, where the nation has been devastated by drug trades and corruption fueled by our so-called “war on drugs.”

Unfortunately, Harris told the people suffering from this that “[i]f you come to our border, you will be turned back.”

This particular statement or any other anti-immigrant policies coming out of the Biden administration have not been criticized by Republicans, who are still on the freaking cookies.