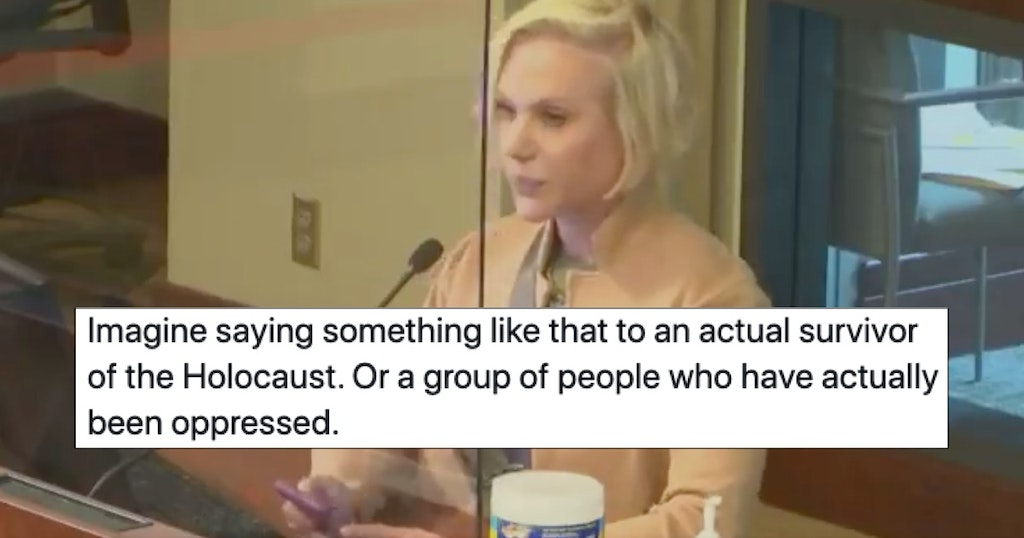 
On Thursday, the Johnson County Commission in Kansas voted to start enforcing mask mandates at businesses with up to a $500 fine for non-compliance. The Shawnee Mission Post reports that the decision was made after state Governor Laura Kelly updated the mask mandate on Wednesday and out of concern for the pressure on local hospitals to treat patients as the ICUs filled.

That sounds reasonable. What sounds less reasonable is this Karen who arrived at the vote to compare a mask mandate to Nazi Germany.

A viral clip of the unnamed blonde woman speaking to the commission has gone viral, mainly because it doesn't seem like she really hears herself.

"I say this with the utmost respect to you and your position," she starts. "But please get out of our life. Please leave us the freedom we are all adults here and capable of making our own decisions."

I am deeply curious what her stance on abortion is. Anyway, she went on to complain about the idea of anyone being reported for non-compliance with a mask mandate. She doesn't like it.

"Do you really want people telling on their neighbors and friends and family like Nazi Germany or the fiction novel 1984?" she continued. "I will not."

Editor Ben Heisler tweeted out the clip, absolutely stunned that the woman would so casually draw such an extreme comparison. But there's a lot more to unpack in the two-minute clip.

She goes on to say she does wear a mask in public, because she fears being "hassled and judged." She doesn't think they work, but does think that there are other health measures the commission could consider enforcing if they care about public health.

"Mandate proper nutrition, mandate sunlight, vitamins, and exercise," she added. It's very interesting that this woman won't wear a mask in a grocery store, but believes the government should have the right to choose what you eat and force you to run around outdoors.

Or maybe she's advocating for universal health and basic income? In which case, welcome, comrade.