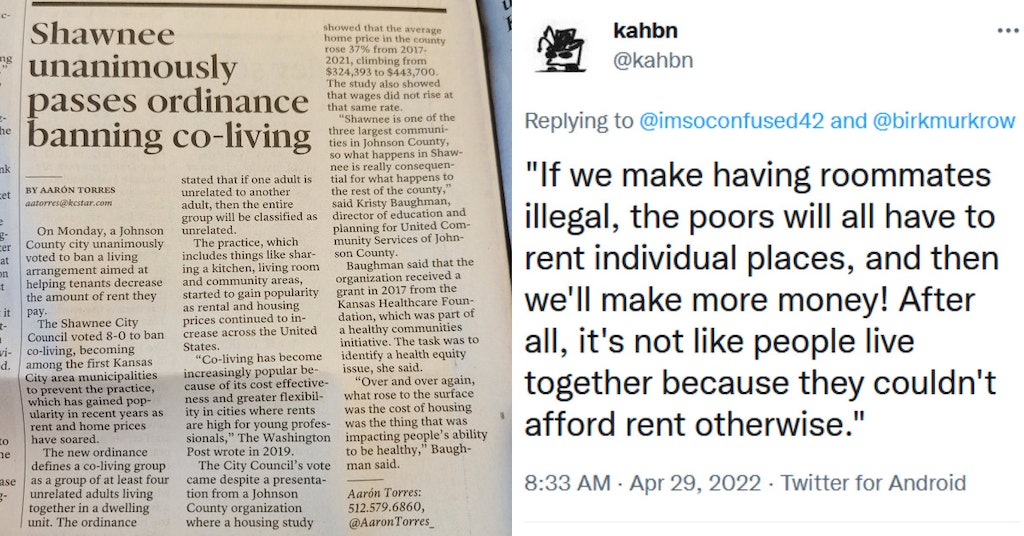 As anybody who missed the window to nab a house before the market went absolutely hog-wild knows, one of the few ways many people can manage to afford rent anymore is to rent a house with a bunch of weird strangers and try to live like that. It’s far from ideal, but unless you’re in a committed relationship or ready to live in a box, it can end up being the only option.

So a lot of people are going to have no options anymore after the city of Shawnee, Kansas, voted to ban this practice, labeled ‘co-living,’ just to make being housed all the more difficult for the poor at a time when it’s already super hard.

In a 8-0 vote, the Shawnee city council banned the practice of having four unrelated individuals living together under one roof. Not only that, but in some twist of logic, the ordinance declares that if even one of the people living together is not related to the rest, that somehow means they’re all not related and are not allowed to live together.

“The new ordinance defines a co-living group as a group of at least four unrelated adults living together in a dwelling unit,” the Kansas City Star reports. “The ordinance stated that if one adult is unrelated to another adult, then the entire group will be classified as unrelated.”

Again, as the poor are well aware, making this house rental roommate situation works very often requires at least four people to a house, if not more, to keep things affordable. No reason for why this should be banned was given in local media reports of this new ordinance, so we’ll all just have to assume it’s another way to punish the poor for daring to be in poverty. Should have thought of that before becoming peasants, etc.

They have noted, however, that house prices in the Shawnee area have increased by 37 percent from 2017 to 2021, with wages staying the same. All across the U.S., houses are selling for amounts that have spiked dramatically in just the past couple of years, with individual homes jumping in price by hundreds of thousands of dollars. Meanwhile, rent is going up everywhere as well, with others seeing massive rent hikes that have mirrored the absurdity of the current housing market.

This has left many young people and others not lucky enough to own a home in despair, feeling squeezed from all sides with no way out. At the same time, homelessness rates are increasing and cities continue the brutal practice of “sweeps,” sending police to trash these folks’ meager belongings and leave them with absolutely nothing, including nowhere to go. Shelters are often already full and refuse people for a myriad of reasons, with rules that cause some to compare these places to just another prison.

If “co-living” bans take off from here, these problems are only going to become worse and worse until something breaks. Unsurprisingly, people are nervous about this and more than a little angry.