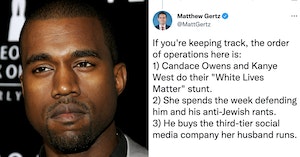 Kanye West has responded to his recent bans from more popular social media platforms by purchasing the one that was restricted by Google and Apple for contributing to the January 6 riot at the Capitol: Parler.

The Twitter clone was launched as a bastion of free speech for right-wing individuals who may or may not be too bigoted for your average social media sites, but ended up with its own rules that ban people for certain types of content, and that kind of hypocrisy seems perfect for West.

West, also known as Ye, was recently booted from Instagram for a post implying that Sean “Diddy” Combs is being controlled by Jewish people, echoing old and dangerous conspiracy theories that even Meta won’t tolerate.

Not long after that, he was suspended from Twitter for saying he was “going death con 3 On JEWISH PEOPLE.” We can all assume that by “death con” he meant “DEFCON,” which is a measure of military readiness.

Rather than rein in his increasingly horrible behavior, West has decided to buy his own social media platform so that he can do and say whatever he wants there with no consequences, (except potential lawsuits for spreading lies about people).

“In a world where conservative opinions are considered to be controversial we have to make sure we have the right to freely express ourselves,” West said in a press release.

To be clear, left-wing opinions are also often considered to be controversial. It’s just that these statements tend to be “give food and shelter to the poor” rather than “I am going to harm this specific and already vulnerable population.”

Parlement Technologies, which owns Parler, put out its own statement trying to paint the action of another obscenely rich person buying their way out of having to follow the rules or be a decent person as “groundbreaking.”

“This deal will change the world, and change the way the world thinks about free speech,” said CEO George Farmer. “Ye is making a groundbreaking move into the free speech media space and will never have to fear being removed from social media again. Once again, Ye proves that he is one step ahead of the legacy media narrative.”

When asked about the “death con” tweet, Farmer called it a “mistake” and then immediately dismissed it as no big deal, implying that West was being “canceled” over nothing. We also now have a new euphemism for “said something deeply bigoted that could fuel terroristic violence.”

“He’s now in a place where he’s fallen victim to the cancelation narrative,” Farmer said of West. “Whether or not what he said offended some people, of course, is up for conversation.”

West appears to be on a mission to offend everyone, by which we mean add fire to an already out-of-control racist and antisemitic blaze consuming the world. This news follows his appearance at the Paris Fashion Week in a shirt bearing the hate slogan “White Lives Matter” alongside Candace Owens, who sported a matching shirt and is married to Farmer. He also appeared on Tucker Carlson’s show on Fox News where he reportedly went on another antisemitic rant that was cut from the broadcast.

Meanwhile, the surviving family of police victim George Floyd is considering a lawsuit after West again made the false claim that he died of a fentanyl overdose. On the same podcast where he told that lie, he claimed that “Jewish Zionists” were to blame for recent stories about the relationship between his ex-wife Kim Kardashian and Pete Davidson.

West seems to be determined to prove himself one of the worst people on the planet this month, and people are noticing.