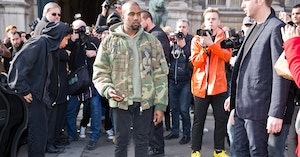 Kanye West is running his mouth again, this time claiming that George Floyd died from a fentanyl overdose and defending the police officer convicted of his murder.

Floyd’s death kicked off a slew of protests against police brutality and racism across the United States back in 2021, after Minneapolis police officer Derek Chauvin was filmed kneeling on his neck for nearly nine minutes as Floyd proclaimed that he couldn’t breathe.

The autopsy results acknowledged fentanyl in his system, but put the blame for the cardiopulmonary arrest that killed him on “neck compression” from law enforcement.

West, however, apparently got a different idea after watching a documentary put out by rightwing extremist Candace Owens in an attempt to discredit the Black Lives Matter movement.

Hearing West regurgitate rightwing talking points to attempt to downplay an injustice that invigorated a movement against systemic racial violence isn’t exactly a surprise turn for a man recently seen wearing a White Lives Matter shirt to make a statement, but it does highlight just how out of touch with reality the rapper has become.

A lawyer for Floyd’s family, Lee Merritt, has already signaled that they may pursue a lawsuit against West in response to his comments.

“While one cannot defame the dead, the family of #GeorgeFloyd is considering suit for Kanye’s false statements about the manner of his death,” Merritt wrote on Twitter. “Claiming Floyd died from fentanyl not the brutality established criminally and civilly undermines & diminishes the Floyd family’s fight.”