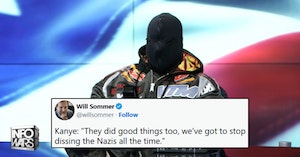 No amount of lost contracts or hypocritical rebuffs from the Republican Party has stopped the Kanye West train from going all the way to Nazi station, it seems, as the rapper is now fully admitting to being a Hitler fan on InfoWars with Alex Jones.

According to Daily Beast reporter Will Sommer, who watched the InfoWars episode so the rest of us didn’t have to, Jones did his best, like other far-right interviewers, to give West the chance to beat the Nazi allegations. Instead, the man who now wants to be known as “Ye” went in the opposite direction.

“You’re not Hitler, you’re not a Nazi,” said Jones.

“Well, I see good things about Hitler, also,” West immediately said. “Every human being has value that they brought to the tabled, especially Hitler.”

The only out for West here may be that his other behavior on the show seems to support theories that the man is not mentally or psychologically well. Sommer reports that West started “holding up a net of some kind and doing a high-pitched voice to mimic Benjamin Netanyahu, and saying Netanyahu might kill him.”

Then, as Jones desperately tried to end the segment, perhaps to at least save himself some face after making the mistake of inviting this walking fascist nightmare onto his show, West wouldn’t let him. Instead, he repeatedly interrupted to wave the net around some more and do the voice again. Then, just before Jones could get them to a commercial break, West straight up said “I like Hitler.”

He then at some point came back on the air to make an appeal on behalf of the Nazis, to whom he thinks we’ve all been too mean.

“They did good things too, we’ve got to stop dissing the Nazis all the time.”

What needs to stop is these far-right media figures thinking they can sanitize West’s reputation when all he’s going to do is say the quiet part out loud. Or not, actually.

Others have reported that Ye repeated a century-old conspiracy theory that 300 Jewish people are running the whole world and manipulating everything, which was widely adopted by Nazis beginning in the 1920s.

This could all be almost funny if it weren’t for the fact that West still has millions of fans, many of whom will agree with anything he says, and that one of two relevant political parties in the most powerful nation on Earth has been increasingly embracing white supremacists for years. The denouncement of Nick Fuentes by just some of the Republicans in office isn’t fooling anyone who has been paying attention.

Reactions from the public are reflecting this alarm mixed with a desire to find some humor in the situation, because surely we’re not just going to have a full repeat of what happened 100 years ago, right? Right?