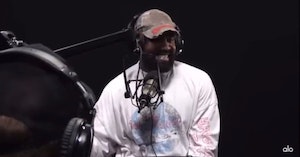 Kanye West, rapper, Donald Trump fan, and man who recently founded his own private school, announced on a podcast that he has apparently not read any book ever, and compared reading to the consumption of classically hated vegetables.

On an episode of the “Alo Mind Full” podcast for the Alo Yoga clothing brand on Friday, he seemed to say that he had never read book and expressed that he prefers good conversation.

“I actually haven’t read any book,” he said.

“Reading is like eating Brussels sprouts for me. And talking is like getting the Giorgio Baldi corn ravioli.”

This statement seemed to alarm people, although there’s nothing necessarily wrong with preferring to receive information verbally over reading. Some people have a hard time focusing on a page covered in text but can learn monumental amounts from listening to podcasts or viewing documentaries instead. West’s issues with reading are severe enough that he says he’ll only read the first and last sentences of long text messages.

However, some found the statement concerning considering the fact that the musician recently opened his own private school (named after his mother), which had a number of people worried about indoctrination.

Aside from his distaste for reading, West has engaged in some alarming and possibly abusive behavior in recent years that has people wondering if he’s stable enough to be responsible for anybody’s education.

On the podcast, he went on to express his frustrations with the expectation to speak “correct” English and the judgment he faces when he doesn’t.

The idea of speaking “correct” or “proper” English, or any other language, has long come under criticism as a way to discriminate against the poor, and especially poor people of color and/or migrants. In the U.S., where schools get their money from local property taxes, poor people tend to get a poorer education than their rich white counterparts, even in public school systems.

African American Vernacular English (AAVE) tends to be particularly derided in this country in spite of having its own unique set of grammatical rules. But the rich white people in charge are the ones who get to decide which version of English is “correct.”

Still, considering Kanye’s history on top of a statement that has people wondering if he at least finished a title such as “Baby’s First ABCs” or “Everybody Poops,” it’s hard to resist the urge to make jokes at his expense, evidenced by what Twitter’s up to right now. Also, some input from brussels sprouts fans.