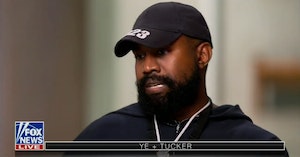 Kanye West, who changed his name to Ye last year even though no one was ever going to call him that, spoke with his perfect match last night on Fox News’ show hosted by ball tanning enthusiast Tucker Carlson. It went about as insanely as you would expect.

To start, West brought up a recent photo shoot of his ex-wife, Kim Kardashian, that featured her in a jean outfit and blonde wig with the pants pulled down to display a jock strap and her bare behind. The rapper decried the fashion industry, seeming to accuse it of making her do magazine covers that he personally doesn’t approve of.

“Kim is a Christian, but she has people who want her to go to Interview magazine and put her ass out while she’s a 40-something-year-old multi-billionaire with four Black children,” he said. “And this is what, how fashion wants to, how they want to present her.”

This seems an odd gripe considering the fact that the Kardashian has done many photoshoots similarly focused on her backside, including prior to her relationship with West. However, it makes more sense when viewed in context with the accusations of intensely controlling and potentially abusive behavior from West during their marriage, to the point that after the divorce, Kim had severe anxiety over dressing herself.

This makes his claim that he took secret control over her shapewear line to try and make it less sexual all the more creepy.

“I had a lot of issues with the imagery of Skims,” he told Tucker. “I felt like there was a lot of imagery that was overly sexualized and things that I wouldn’t want to see my wife, and definitely not my daughters, doing in order to sell product.”

Christian men? Policing women’s sexuality? Must be a day ending in “Y.”

West also addressed his appearance at Paris Fashion Week last weekend in which he and Candace Owens sported matching shirts reading “White Lives Matter,” a hate slogan and name of a neo-Nazi organization. The reason he did this alongside the far-right political commentator, he says, is because he thought it was funny, and something about godly vibes.

“I do certain things from a feeling. I just channel the energy. It just feels right. It’s using a gut instinct, a connection with God, and just brilliance,” he said.

“You know, my dad is an educated ex-Black Panther, and he put in a text to me today. He said, ‘White Lives Matter. Ha ha ha ha ha.’ And I said, ‘I thought the shirt was a funny shirt. I thought the idea of me wearing it was funny.'”

Many other people did not find it funny, including those who have been harassed by the Southern Poverty Law Center certified hate group.

But the interview went on, and West repeated claims that legal abortion is an attempt to end the Black race, citing completely false statistics. Also, people not being horribly fatphobic about Lizzo is Black genocide, according to the Trump fan.

“I care about the fact that there’s more Black babies being aborted than born in New York City at this point. That 50 percent of Black death in America is abortion,” he said, either incorrect or outright lying.

Adding on to that, he claimed that people who were unhappy when Lizzo announced some weight loss that one time were all bots made in some conspiracy to kill all the Black people by making them fat. He went so far as to say that promoting the idea that one can be fat and healthy at the same time, something increasingly supported by science, is “demonic.”

“When Lizzo loses 10 pounds and announces it, the bots […] on Instagram, they attack her for losing weight, because the media wants to put out a perception that being overweight is the new goal, when it’s actually unhealthy,” he claimed. “Let’s get aside from the fact whether it’s fashion and Vogue, which it’s not, or if someone thinks it’s attractive, to each his own. It’s actually clinically unhealthy. For people to promote that, it’s demonic.”

The pervasive idea that being “overweight” is automatically unhealthy and bad has lately been challenged by a large number of studies that keep coming out to show that the old adage isn’t true. In fact, people now classified as “overweight” in the U.S. and much of the world tend to live longer than their thinner counterparts. Obsession with thinness, meanwhile, kills thousands of people in the U.S. alone every year.

Overall, the interview is just about what you would expect from the combination of Kanye West and Tucker Carlson.