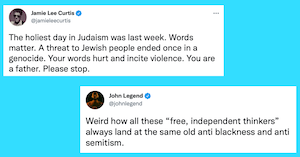 Kanye West was recently suspended from both Twitter and Instagram after sharing a series of antisemitic statements. A spokesperson for Meta, which is Instagram’s parent company, said that the platform removed content from West’s page that violated company policies. They also restricted his account. Similarly, a representative for Twitter also said that on Monday, the app locked West’s account for violating their rules.

West shared a screenshot of a text message to Sean “Diddy” Combs that he sent which said that Combs was controlled by Jewish people: “Ima use you as an example to show the Jewish people that told you to call me that no one can threaten or influence me.”

“You guys have toyed with me and tried to black ball anyone whoever opposes your agenda,” he also wrote, according to Internet Archive’s Wayback Machine records pulled by CNN.

“The funny thing is I actually can’t be Anti Semitic because black people are actually Jew,” he wrote.

West has been given a lot of leeway for really bad behavior lately, including harassing his ex-wife Kim Kardashian and her ex-boyfriend Pete Davidson. He also spoke out against anti-racism movement Black Lives Matter by wearing a “White Lives Matter” shirt and accusing Black Lives Matter of being a hoax.

West also made fat-phobic statements about pop superstar Lizzo on the Tucker Carlson, saying in a bizarre exchange that media organizations promote her “unhealthy weight.”

“Let’s get aside from the fact whether it’s fashion and vogue, which it’s not, or if someone thinks it’s attractive, to each his own, it’s actually clinically unhealthy,” West said randomly.

Roxane Gay summed up the whole situation pretty accurately in a recent tweet: “Also, Kanye has shown us who he is, repeatedly. Anti-semitism is not a symptom of mental illness. He is a bigot. He says whatever the hell he wants and people treat him like a harmless amusement. But there is nothing harmless about us anti-semitism, racism, and misogyny,” the writer said.

Others thankfully spoke out against West’s anti-semitism as well, sharing their disgust on social media.

John Legend referred to West in tweet: “Weird how all these ‘free, independent thinkers’ always land at the same old anti blackness and anti semitism.”

Jamie Lee Curtis also called out West on his anti-Semitism: “The holiest day in Judaism was last week. Words matter. A threat to Jewish people ended once in a genocide. Your words hurt and incite violence. You are a father. Please stop.”