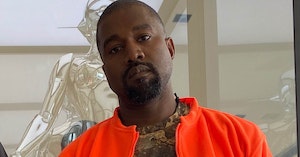 Rapper, fashion designer, and national embarrassment Kanye West, also known as Ye, was apparently deeply controlling of ex-wife Kim Kardashian and threw a tantrum when she started dressing herself again post-divorce. According to Kardashian, she had panic attacks over picking out her own outfits after the breakup because he used to do it for her.

Then, after she dressed herself for the Wall Street Journal Magazine Innovator Awards, she says he called her up to tell her that her “career’s over” and compared the outfit to something seen on The Simpsons.

“Oh, and then he called me afterwards,” she said to her sister Kourtney. “He told me my career’s over. And then he showed me a picture of Marge Simpson wearing something similar.”

The outfit was a Skims x Fendi brown leather dress plus gloves and snakeskin-print shoes. No one seems to be able to figure out which Marge Simpson outfit he was comparing hers to. It certainly doesn’t look much like Marge’s iconic green dress.

Kardashian referred to Kanye’s constant suggestions on the kind of outfits and makeup and hairstyles she should wear as his “love language,” but it sounds more like he needed to have tight and constant control over her appearance. She has previously said that Kanye “reworked” her entire closet just months after the got together, putting her down by telling her she had “the worst style.” He also once flew all the way to Paris for one day just to pick out her clothes when he saw her wearing an outfit he didn’t like.

It’s also extremely not normal to have panic attacks over picking out one’s outfit, even if you are considered to be a fashion icon. And it sounds like her clothing wasn’t the only thing he held tight control over.

“I got to a point where I would ask him for advice for everything — down to what I wear,” said Kim. “Even now I’m having panic attacks like, ‘what do I wear?'”

All of this gets even worse when put into the context of how much West has harassed his ex-wife since the divorce, with experts voicing concern over his behavior to the point of worrying about Kardashian’s safety. Earlier this year, a leaked message seemed to show Kim worrying about that herself after West encouraged his fans to scream at her new partner, Pete Davidson, whenever they saw him in public. Then, of course, there was his “Eazy” video.

He even bought a house across the street from her after their divorce, which on its own is rather concerning behavior.

It’s taken 10 months, but Kardashian finally seems to be regaining her confidence and her sense of self away from him.

“I was always ‘The Kardashians’ with my sisters, and then I was ‘Kimye.’ Like, who is Kim K? That is the jump. How do I get there without Kanye?” she said. “When I filed for divorce, it’s been like 10 months now. And I am finally just stepping out [and] being like, ‘I can do this.'”