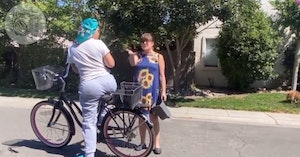 A white woman who convinced herself she was just being a good Samaritan couldn’t seem to stop herself from harassing a Black woman selling hair extensions in broad daylight.

The interaction was filmed by the woman’s customer, waiting in her car for the hair extensions to be dropped off.

At the start, the white woman is insisting that she’s just giving the entrepreneur a “heads up” that it looks like she’s selling drugs—despite her riding around on a bike with a basket full of hair extensions in broad daylight outside a local park.

“Why are you doing it here?” the nosy neighbor asks. “Because I can,” the woman replies. “It’s a public park.”

“Okay, it looks like a drug deal,” the white lady insists.

Exchanging goods for money in a public place rather than having complete strangers come to your home is incredibly common, not to mention smart. And anyone who has ever downloaded the NextDoor app for neighborhood interactions knows perfectly well that someone with a bunch of strange cars regularly pulling up to their house is pretty likely to get accused of dealing drugs as well.

The two went back and forth for a few more seconds, with the Black woman patiently explaining that she had every right to be in the park before she handed the extensions over to her grateful customer.

But as soon as she did, the white woman jumped right back in, claiming again that she just wanted to give a “heads up” and that it “looks like a drug deal.”

“And people are talking about the girl on the bike that’s dealing drugs,” the white woman insists. “If they call the police on you, I tried. Okay? I tried.”

A lot of folks watching the video online did not have anywhere near as much patience for the audacity happening here as the businesswoman did.

While it seems unlikely that people actually were complaining about “the girl on the bike that’s dealing drugs,” another option for handling a situation where neighbors are falsely gossiping about someone is to simply shut them down rather than harass the person they’re making up lies about.