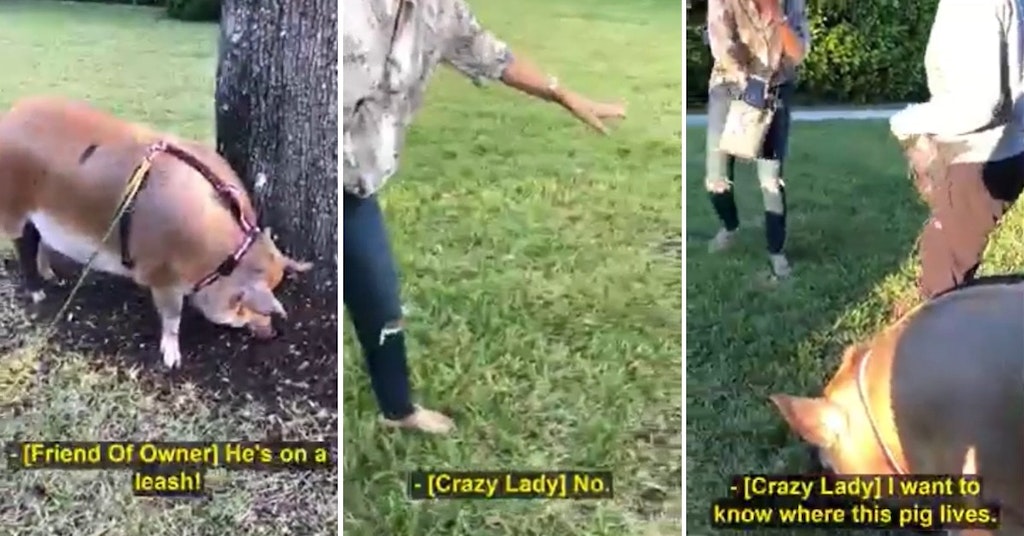 One nosey woman had her mind absolutely blown by the sight on a pig on a leash being walked through her neighborhood and just had to get up in the owner’s business, yelling a bunch because the animal was big and refusing to believe that he was an emotional support pet.

Another woman who was with the pig’s owner on the walk caught the Karen on video yelling at them and threatening to call the local homeowner’s association, which the walkers say were already aware of the animal.

This Karen, however, claimed to know everything about the neighborhood and had never seen them or their pig before.

“This is a community that has bylaws, and if you have a dog, you put it on a leash,” says Karen in spite of the fact that the pig is clearly on a leash.

When the other women point this out, Karen can only yell about how big the animal is. While the pig is indeed quite large, it remains perfectly well-behaved, smelling and nibbling at the grass, completely unbothered by the shrieking of his nosey neighbor. The best part is when he drops a load, which his owner immediately goes to clean up with a standard baggie.

“Look at that, right on our lawn!” the woman shouts. They did not appear to actually be on the woman’s lawn, but part of the area’s public space where that plenty of dogs, some of which could be as big as the pig, do their business without being harassed.

“She’s picking it up!” says the woman taking the video.

“Pigs poop all the time, just like a dog,” the owner points out.

The Karen, however, is completely scandalized by how much the pig poops even though the owner is able to get it all in the bag.

“Look, okay, look how much is in there!” she shrieks. “Seriously!”

“It’s fine!” says the filmer. “You are being a grumpy pants. Leave us alone.”

The owner of the pig repeatedly tells the Karen to call her lawyer if she has a problem with the emotional support animal, but the woman instead threatens to call the HOA, which doesn’t bother the other two at all as they try to explain that the association already knows about the pig. They are, however, bothered by her continuing to follow them and loudly demonstrating her ignorance to the fact that any animal can serve as emotional support.

The two walkers have to threaten to call the police to finally get Karen to leave them alone, who yells to the clouds that she will be “following up on this.”

The video appeared on Reddit’s “Public Freakout” forum on Saturday. Many commenters have speculated that people like this lady just get bored.

“She is mad because she is probably entertained by being mad and causing drama,” said one Reddit user.

“It’s a subset of really, really incredibly boring people who have literally nothing else going on in their lives, so have to blow every minor non-issue up into a gigantic drama as a sad way of justifying their own existence and of feigning hardship and struggle in order to garner attention and pity for being so hard done by,” said another.

Others chimed in to praise the owner for raising such a well-behaved pig to adulthood. We all hope that Chorizo continues to enjoy his walk in spite of any other screeching strangers who might have a problem with the size of his poops.