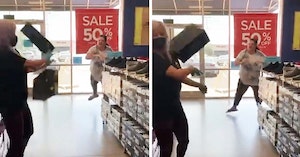 What is it about the so-called “Karen” personality that clashes so violently with being politely asked to wear a mask to help prevent the transmission and spread of COVID-19? We don’t know either, but in this latest incident, one such Karen went wild in an Oklahoma City Sketchers store—and as a result, is now facing legal repercussions.

As things tend to happen these days, the incident was caught on video. One might surmise this in itself would be enough to discourage Karen behavior, but obviously [waves arms everywhere] it’s not.

According to Fox 25, the woman was told by the employee several times that she must put on a mask, but those requests were ignored and she continued shopping. When the woman went to the counter to checkout, she was told once again that she needed to wear a mask—and the employee even helpfully suggested that she go over to a nearby Lowe’s to get one before completing her purchase.

And that’s where the action picks up on the video, as the Karen in question can be seen hurling the shoe boxes at the employee who had requested that she wear a mask. “This Karen thinks it’s okay to throw shoes at store workers,” wrote one Twitter user who shared the since-viral footage.

Although the woman can be seen getting into her car and driving off in the video, in a twist, she did so leaving behind her wallet on the counter. The employees then turned the wallet over to the police and have since pressed charges—as others on Twitter have artfully pointed out, among other astute observations.

Well. This is at Skechers store in Oklahoma City.

A woman is caught on camera throwing shoe boxes after she was told to put on a mask, according to an employee.

The woman left her wallet at the scene and it was handed over to police.@kfor pic.twitter.com/acbij77BPI

The best part about this was the lady that threw the shoes actually left her wallet on the counter ???????? so when they called the cops they had her address and everything, the workers pressed charges as they should ???????? https://t.co/8Pu3FtEsUE

y’all don’t be ready to lose your job enough for me https://t.co/U5zj99U9rD

Conservatives will repeat the phrase ‘law and order’ like it’s their mantra, but then will casually commit assault. https://t.co/HLnBbvyUrJ

Others speculated on what they would have done if they had been put in a similar situation.

“The moment she turned her back to me I would have yanked her oversized ass straight to the ground,” wrote one user, while another added, “You ain’t making to your car if you disrespect me like this.”

ain’t no 9-5 worth it idc. Karen would’ve had to pick herself up along with every shoe thrown at me. https://t.co/FLoTifyeFD

In retrospect, perhaps this Karen should be relieved that an assault charge is all she got slapped with—if you know what we mean.