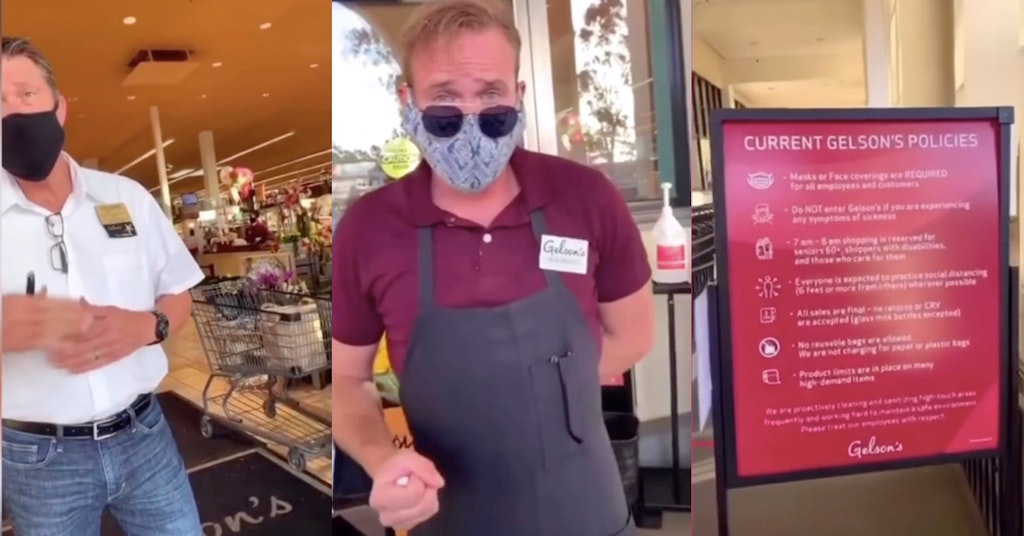 
“No shoes, no shirt, no service” has been a pretty basic policy in place for most businesses for decades. There are always some weirdos who try to skirt their way around it, but most people accept that it’s for everyone’s health and safety. But while many folks understand that masks are now becoming a temporary requirement for the exact same reason, more than a few people are going out of their way to claim that it’s discriminatory and anyone enforcing it is anti-freedom.

The best thing about these people is that they’re so convinced they’re in the right that they’re often the ones filming their own freak outs and sharing them to the internet to prove how despicable businesses who don’t want their customers or employees to contract a potentially fatal virus are.

A woman named Shelley Lewis did exactly that when she faced off against a Gelson’s grocery store manager in Dana Point, California after an employee told her she wasn’t allowed to come in and shop without a mask.

The nearly three minute video shows a confrontational Lewis turning down every suggestion made by the patient folks at Gelson’s. When they offered to provide her with a face mask, she vaguely claimed to have some sort of medical condition that prevents her from wearing one. When they offered to shop for her, she decried the idea that she would have to give anyone her “bank information” or her “private credit card,” as if that is somehow different from how people normally shop or spend money.

“I have private stuff that I don’t want you to see,” Lewis insists, referring to her shopping list. She then immediately escalates to threatening a lawsuit, because literally of course she does.

While the ever-so-accommodating manager goes back into the store to get her the number for Gelson’s corporate office, the employee who initially blocked her from shopping goes about his job outside, cleaning carts and directing other customers into the store.

But apparently he didn’t seem appropriately chagrined at Lewis’s tragic situation of her own making, so, thinking she still had any point to make at all, she went back over to bother him and chastise him for dancing happily as he went about his duties.

The whole incident had people online reeling from start to finish.

And a common sentiment is that it seemed as though Lewis came prepared for a confrontation, rather than a shopping excursion.

Some of her comments to the manager were rather questionable.

And as chill as the manager was, cart guy was the real MVP of this ridiculous confrontation.

So if you need a safe place to shop that actually enforces mask regulations, stop on by your local Gelson's! Hopefully they're all following the lead of this store and prioritizing health and safety over the entitlement of Karens.