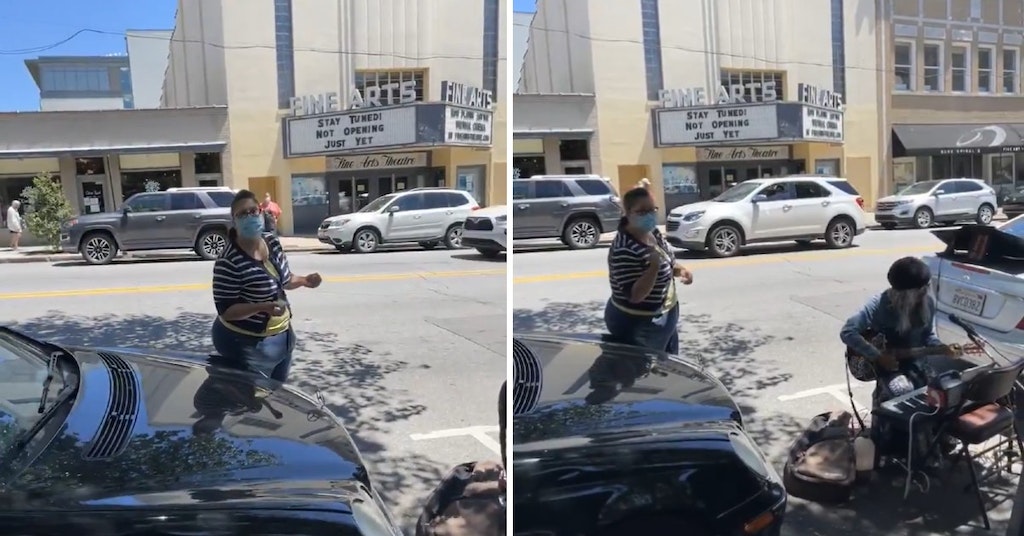 
Video of a woman in Asheville, North Carolina, has people accusing her of being a “Karen” for bothering a street musician who seemed to be across the street from her business, where she complained that people could hear the music inside.

While this might seem like a problem in some areas, performers like this have become such an integral part of Asheville that it’s considered to be part of what draws tourism and enrichens the city and its culture.

So when this woman tried to make the musician move from the spot he had chosen in spite of his objections, a bystander came to his defense and started filming.

“We can still hear it in our store so loud,” says the woman.

“So what, it’s good music, Karen!” says the bystander.

The woman does not appear to appreciate being called a Karen (or at that moment realizes she’s being filmed) as the musician tries to explain why he can’t move further down the street, pausing to thank the bystander for the compliment.

“I’m just trying to have a respectful conversation,” says the Karen.

“No, you’re just being a Karen and trying to harass him,” said the filmer.

“I appreciate the musicians in our town,” says the woman.

Apparently just not when they’re too close to her store. Unfortunately, no matter where the musician goes, he’s very likely to be near somebody’s business because that’s where the foot traffic is. Buskers don’t make much money playing where there are no people.

Somehow, Asheville has always managed to get along with its street musicians even if they can be loud, but this woman seems to think she’s the only person in the city who matters and accuses the bystander of harassing her for standing up for the performer.

“I don’t appreciate you harassing me,” she says.

“This man is making good music and you’re harassing him,” says the filmer. “Leave him alone.”

The video stops here so it’s unclear if and how this issue was resolved, but the video ended up on both Instagram and Twitter where many thousands of viewers weighed in. Some defended the woman, saying that she did seem at least somewhat polite and was airing a legitimate grievance. People familiar with Asheville, however, seemed widely unsympathetic to her and took the side of the musician.

“What is she selling? Silent staring contests?” asked one Twitter user. “I can’t think of a store or business that doesn’t play music. Shoot she could save money on overheard by not needing a Pandora for Business account! Live music tends to be an attraction!”

Maybe she should move her store away from the “Fine Arts Theater” if she doesn’t like music.