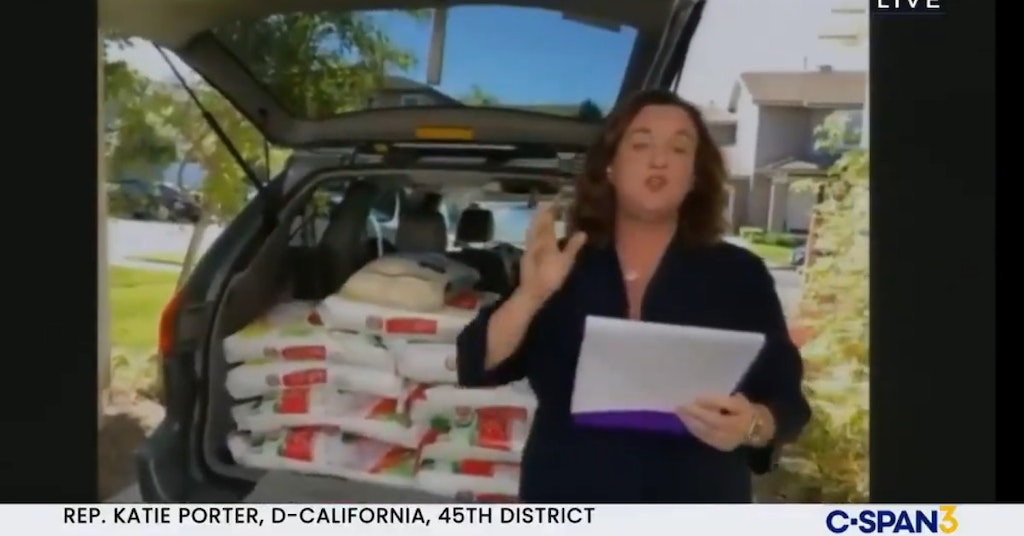 Representative Katie Porter is making waves once again for the fossil fuel industry, this time by absolutely wrecking a set of executives for oil companies and pro-oil lobby groups as they testified before the House Oversight and Reform Committee today. A clip of Porter questioning the oil barons from her home and demonstrating just how much public land in the U.S. these corporations have bought up and then just let sit empty for no apparent reason using a minivan full of rice is now going viral for her non-nonsense presentation.

Porter accused the wealthy climate change-fueling executives of scooping up far more land than they could ever need for drilling, with much of it going entirely unused, along with 7,700 permits that were apparently granted for nothing. In classic form, she had absolutely no patience for those who decided to dodge her simple questions.

“How many acres of public land are already leased by fossil fuel companies and not even used yet?” Porter asked one of the executives. “Just available for drilling whenever you decide.”

“Congresswoman, again, I think you have a fundamental misunderstanding as to how this process works and the and resources it takes…” the executive tries to say before being cut off by Porter.

“Reclaiming my time. The answer is 13.9 million acres. To visualize how much land that is, if each grain of rice was one acre, that would be 479 pounds of rice.”

Porter underlines this point by raising the back door of her minivan to reveal many large bags of rice. But she wasn’t even close to done.

“The American Petroleum Institute even opposed pausing more leasing on our lands and even sued to stop it, because apparently, this acreage wasn’t enough,” she continued.

Porter goes on to ask each executive whether they personally support simply putting a pause on granting new leases for land they’re not using, and only one gives a straight “no” with the rest trying to babble excuses and getting the “reclaiming my time” treatment while she steadily pours rice out of one of the bags.

Our favorite part is “reclaiming my time, thank you for your answer, the answer there was ‘no.'”

After the final executive answers in the negative and tries to offer yet another excuse, Porter cuts her right off.

“You already have 13.9 million acres!” she exclaims. “This is equivalent to Maryland and New Jersey combined. How much more do you need? How much more acreage? You have two of our 50 states at a price that makes the Louisiana Purchase look like a ripoff and you’re not even using it.”

“When you lobby and you sue so that you can take more of our public land, you’re saying too much is never enough. The American people are tired of this charade.”

She’s right, and what they’re not tired of is Katie Porter.