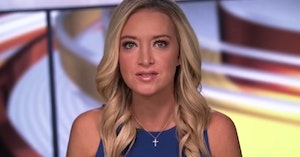 During a speech at Turning Point USA’s Young Women’s Leadership Summit, McEnany cited her religion and motherhood as proof of some sort that she is an honest woman.

“And then there was the question, ‘Will you ever lie to us?’ And I said without hesitation, ‘No.’ And I never did,” she said. “As a woman of faith, as a mother of baby Blake, as a person who meticulously prepared at some of the world’s hardest institutions, I never lied.”

McEnany further claimed that she “sourced” her information, while also insisting members of the press constantly tell lies about about Republicans. But as The Guardian pointed out, the “lies” the former press secretary pointed to as examples of media bias were all stories “subject to evolving reporting.”

No matter how she tries to spin it now, the fact remains that McEnany was caught sharing outright lies or misleading the public an alarming number of times.

And while people weren’t exactly surprised at her attempts to rewrite recent history, no one was thrilled about it either.

After Trump lost the election, McEnany pivoted to becoming a commentator and cohost on Fox News, so it ultimately isn’t that surprising that she hasn’t undergone a change of heart and finally admitted to her deception during the Trump era.