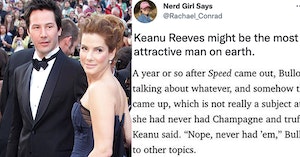 Keanu Reeves has long held a reputation for being just about the nicest guy in Hollywood. Every story that comes out about him only makes people love him more, because they’re all genuinely good.

But every time we collectively think to ourselves, “gosh, Keanu really can’t get any better, can he?” something comes out that proves us wrong.

As part of a recent Esquire profile on the Matrix star, Sandra Bullock, who has worked with Reeves on several films, shared an anecdote from their friendship. It’s best shared in its entirety:

A year or so after Speed came out, Bullock and Keanu were hanging out, talking about whatever, and somehow the subject of Champagne and truffles came up, which is not really a subject at all, but Bullock said, offhand, that she had never had Champagne and truffles. A nothing comment. “Really?” Keanu said. “Nope, never had ’em,” Bullock said. The conversation wandered to other topics.

A few days later, Bullock was sitting in the living room of the little house she had bought — her first house — with a girlfriend. They were painting their nails. She heard an engine outside, which turned out to be Keanu’s motorcycle. He rang the doorbell, and Bullock opened the door to find him there with flowers, Champagne, and truffles. He said, “I just thought you might want to try Champagne and truffles, to see what it’s like.” He sat on the couch. Bullock poured some Champagne, and they opened the truffles. Keanu put his hands out, without a word, and Bullock painted his nails black, same as hers.

He didn’t stay long. He had a date, in fact. He called his date, said he would be there soon, and left.

Bullock, like others, only had positive things to say about Reeves, adding that “he’s a listener” (as clearly evidenced by her story) and that she, too, doesn’t “think there’s anyone who has something horrible to say about him.”

Fans loved this latest glimpse into the actor’s past, and readily tweeted their admiration.

Keanu Reeves might be the most attractive man on earth. pic.twitter.com/anHLmBY0PO

sometimes have an allergy to a "this celebrity is actually SO sweet" anecdotes but I can't resist a good Keanu story https://t.co/p5XJrdpEf2

years ago i read this Keanu profile from the 90s where they talked to like the doorman at the apartment where he lived and this guy said "that man rides his motorcycle around and bothers no one" https://t.co/v2lxTuqiwP

imo the highest endorsement of keanu reeves being a good dude is that he could do something like show up randomly at sandra bullock's house with champagne and truffles and she was still like yeah, he absolutely never had a crush on me

Sometimes we get a little too into worshipping celebrities just because they seem cool, but the way Keanu manages to be cool and good should truly be the new standard. You gotta love it.