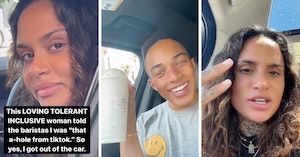 Kehlani set the bar for dealing with attention-hungry confrontational jerks high this week after coming across conservative TikToker and provocateur Christian Walker at Starbucks.

According to the singer, who uses she/they pronouns, Walker had been throwing a temper tantrum about Pride flags while waiting both just happened to be waiting in the drive-thru line for coffee. It drew their attention, and continued for some time, so when they pulled up to the window, they decided to go ahead and warn the barista about who this guy was and that he would probably try to start something and record it for views.

That’s exactly what happened, although his target wound up being Kehlani instead.

He allegedly overheard her call him an a**hole to the employee and responded by screaming that she’s a b*tch holding up the line again and again. Then, he started recording.

The video Walker shared to his social media shows him yelling out that Kehlani is “so rude” and insisting that “everyone’s entitled to an opinion.” When they didn’t seem interested in engaging with him, he got out of his vehicle and confronted them at their car window.

Kehlani, who later explained she was FaceTime with her therapist the entire time, kept a level head, perfectly aware that Walker was trying to rile her up to fit the narrative he always attempts to sell his viewers — that anyone perceived as liberal is aggressive, rude, whiny, and confrontational, despite him being the one putting all those qualities on full display.

“This mediocre singer that everyone’s forgotten about, Kehlani, told my baristas at Starbucks that I was an ‘a**hole’ and to be ‘safe around me.’ Well, I set her straight,” he hilariously claimed on Twitter. “I’m tired of these fake woke people being so rude to everyone and acting like they’re the good ones.”

Walker’s video alone left him looking unhinged and desperate for attention, but when Kehlani’s subsequent explanation of how everything started came out, it only served to highlight even more how ridiculous this was.

The TikToker, who refuses to identify as gay despite being open about his attraction to men, has made a point during and after Pride month to record and complain about rainbow flags he’s found in the wild, so Kehlani’s recounting of events sounds perfectly in line with his obnoxious, tragic brand.

But at the end of the day, attention was what Walker wanted, and attention is what he got.

And while his fans undoubtedly applauded him for his behavior, the real takeaway for most people was how well Kehlani handled the whole situation.

Walker’s antics might get him the fifteen minutes of fame he so desperately craves for the time being, but the reputation he’s creating for himself is going to follow him for the rest of his life.

Kehlani, meanwhile, not only walked away with the moral high ground in this situation, but managed to look good doing it.