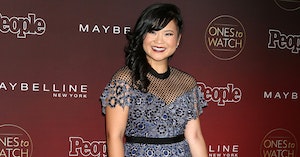 People Voice Their Support For Kelly Marie Tran, Criticize How “Star Wars: The Rise Of Skywalker” Treated Her Character

Kelly Marie Tran played Rose Tico in Star Wars: The Last Jedi, a hero of the Resistance who plays a pretty big role alongside John Boyega’s Finn. The two have some wacky and wild adventures on a planet dedicated to decadent gambling, and Tran’s exploits are both entertaining and inspiring.

Her role in Star Wars: The Rise of Skywalker is a little different. She barely appeared in it.

There’s a lot to like and a lot to dislike in #TROS , but no matter how you feel, can we agree Rose Tico deserves better? pic.twitter.com/aZew1Bwnrd

Fan reaction to The Rise of Skywalker has been very mixed. A lot of people are complaining that J.J. Abrams rolled back the more forward-thinking narrative and casting decisions that were implemented in the recent films, which centered women and POC characters in an entirely new way.

Those films attracted a lot of ire from older fans, who thought the Force should only be used by someone who looked like a younger Mark Hamill. After they were released, Tran actually received an enormous amount of harassment, especially after she spoke out about her Vietnamese heritage and the fact that she was the first Asian-American to play a lead role in Star Wars. She ended up deleting her Instagram.

With that in mind, the disappearance of Rose Tico is especially egregious:

What #StarWarsRiseofSkywalker did to Rose Tico is unconscionable. Kelly Marie Tran got less screen time than Dominic Monaghan’s random new character. They Jar Jar Binks-ed her because trolls bullied her off the Internet. Kelly deserved better.

“Kelly Marie Tran was treated abominably by #StarWars and by TROS specifically, validating racism and online bullies” is the only Discourse I am currently accepting, thank you. pic.twitter.com/c08bGtIOl1

The hashtag #WheresRose is being used to talk about how Kelly Marie Tran was sidelined to make room for random new characters, and more male-centered action.

Many people feel Abrams’ decision to forget about her was a way of conceding to racist trolls who made Tran’s life miserable just for appearing in their precious franchise:

Finn literally says "last chance Rose" and then she says something about the General wanting her to stay and do something. Her real line should have been "sorry, the director of this film doesn't want me to interfere with the fun trio banter" #trosspoilers #trosbad #wheresrose https://t.co/HvUMKF5VjD

it deeply angers me to see how disney & jj abrams catered to racists by completely sidelining rose. when we last saw her she was kissing finn, now she has about two lines. she was one of the main characters and TROS is doing its best to pretend she never even existed #wheresrose

My thoughts exactly. KMT was tokenized. The worst decision made with this trilogy. JJ's worst decision, and proves how much of a coward he was and how shitty the typical white male Star Wars fan is. #wheresrose #TheRiseOfSkywalker https://t.co/pqDeYyYVRq

There’s also a #WheresFinn hashtag. Though Finn has more screen time than Rose Tico, John Boyega’s character was introduced in The Force Awakens as the protagonist, alongside Rey. Folks are unhappy with how he was minimized in this culmination:

John Boyega appreciation thread. I love him as an actor and I LOVE Finn as a character, he deserves so much better.#wheresfinn pic.twitter.com/YBzf8MiMsM

A good piece. Even in the core films, Finn gets the role of comic relief more than I’d like. He’s the male lead. He’s a hero who made hard decisions and risked his life. He deserves more balanced storytelling, and way more marketing exposure. #WheresFinn https://t.co/JSRzQQ7ZXl

If Finn isn’t going big in TROS what’s the point of having a Stormtrooper defect in your sequel trilogy in the first place? #WheresFinn pic.twitter.com/aSiLQUF5s7

I think the worst thing about the sidelining of #WheresFinn and the propping up of #WheresRose is that both characters got done dirty. Finn went from being a lead to just an important side character while Rose went from an underwritten character to a non-existent one.

The Rise of Skywalker might be very popular amongst older fans, who see this as a return to form. But for a lot of younger people who were excited to see themselves represented, it’s a huge disappointment and loss.