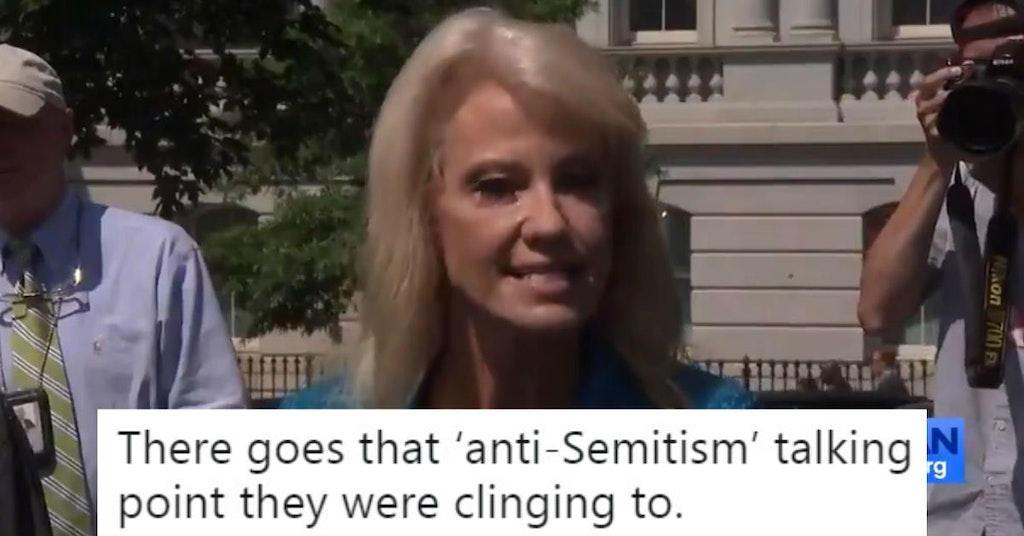 Kellyanne Conway, White House counselor and woman who’s about to be held in contempt of court, responded to a reasonable question from Breakfast Media reporter Andrew Feinberg by asking him an unreasonable one.

“What’s your ethnicity?” Conway asked reporter Andrew Feinberg after he asked the White House advisor which countries Trump was referring to in his infamous tweet.

When Feinberg said that such a question is not relevant, Conway ceased to make any sense at all for a full 30 seconds.

“No no, it is. Because you’re asking about, he said, ‘originally.’ He said ‘originally from.’ And you know everything he has said since, and to have a full conversation.”

Conway’s alarming response during a time when white nationalism is an open issue again came after Feinberg asked her which countries Donald Trump thinks that the four congresswomen he’s been attacking, now known as “The Squad,” should “go back” to. After Conway’s word salad, Feinberg continues to question her, though it’s hard to understand him as the press is often not given mics in Trump’s White House.

She then says a thing that would have blown the lid off of every conservative in the country if one of The Squad had said it.

“A lot of us are sick and tired of this country.”

Kellyanne Conway hates America, everybody! Just kidding, of course, she’s only expressing frustration with what she sees as the country’s flaws, which is what certain Democratic congresswomen have been doing before getting accused of hating America.

Feinberg himself believes that the ethnicity question only confirms the nationalist nature of Trump’s “go back to your country” tweets.

By asking about my ethnicity (a mix of 🇵🇱 🇱🇹 🇷🇺 and 🇱🇻, I’m told) in response to my question, @KellyannePolls inadvertently confirmed that @realDonaldTrump was telling @IlhanMN, @RashidaTlaib, @AOC, @AyannaPressley to return to Somalia, Gaza, Puerto Rico, and somewhere in Africa. https://t.co/0egLbFXILk

Whatever her reasoning for the question, it was not a good look. “Kellyanne” is now trending on Twitter, with the vast majority of tweets about her being negative.

You almost have to admire the sheer balls it takes to go full Nazi in public, on the record…

@AndrewFeinberg asks Kellyanne Conway : "What do you think of Trump's latest tweets?"

There goes that ‘anti-Semitism’ talking point they were clinging to.pic.twitter.com/km0fGuCWpu

A journalist with a Jewish-coded surname just asked Kellyanne Conway about Trump's racist attacks against Black, Latinx & Arab Congresswomen and she responded by asking him, "What's your ethnicity?". Subtle, she's not. https://t.co/FppnuueeHZ

Today Kellyanne Conway asked a Jewish reporter to state his ethnicity, and followed it up by alluding to dual loyalty.

This is going exactly where we said it was going to go three years ago.

I mean, just for context, would Kellyanne Conway have asked a reporter name McCain or Jones what his ethnicity was? No way.

My entire life countless white woman have asked me:

"What's your ethnicity?"
"Where are you really from?"
"Where is your family from?"

But never a government official when I'm asking a question as a reporter. #BeBest, Kellyanne Conway https://t.co/d7l0BpS02A

How does Frau Kellyanne Goebbels avoid answering a question about Trump's racist tweets put to her by a reporter with a Jewish surname? Why, by asking him what his ethnicity is. Of course. https://t.co/OeW01MXgPr

Oh, and she also referred to the women of color in The Squad as part of a “dark underbelly” of the country. Not subtle at all, Kellyanne.