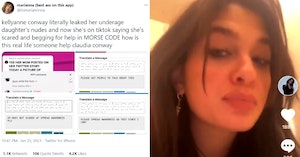 Twitter users were shocked Monday to find that a topless photo of 16-year-old Claudia Conway had appeared in a fleet posted from Kellyanne’s account without the teen’s consent.

In a TikTok video responding to this disturbing news, Claudia suggested that her mother had taken a picture of the photo from her daughter’s personal phone and either posted it by mistake or was hacked, but also called for Kellyanne to be arrested.

“The picture is from months ago, and I’m assuming my mom took my phone—she takes it all the time— she took a picture of that, so that was on her phone.”

“So she accidentally posted it or somebody hacked her, but nobody would ever have any photo like that.”

“I’m literally at a loss for words. If you see it, report it.”

Kellyanne Conway, former Senior Counselor to the President under Donald Trump, has been accused of child abuse in the past after Claudia posted videos of her screaming and hitting her daughter and stated she was seeking emancipation.

Claudia also accused her mother of refusing to take her to the hospital after she caught COVID-19 from Kellyanne and was exhibiting signs of respiratory distress. She has repeatedly called for help from her social media followers in videos and comments she later deletes.

YouTuber Tana Mongeau posted a livestream of a FaceTime call with Claudia to Instagram on Monday night. The video captured a confrontation between Kellyanne and Claudia, and Kellyanne can be heard calling Claudia a “mentally ill” and a “phone addict.” It ends with a police officer showing up.

In addition to the TikTok videos responding to this traumatic news, Claudia appeared to post messages in Morse code begging people to spread awareness of what was happening to her.

Tuesday morning, George Conway tweeted out a TikTok video of Claudia telling people to stop calling the authorities and to “stop sending hate” to her family, as well as to announce that she will be spending time off social media.

Claudia claimed in the video that the words were coming from her and she wasn’t being “forced” to say them. The teen has indicated in past TikTok posts and comments that her parents have forced her to recite assurances that her parents are not abusing her in videos they made her post. Many who are concerned for Claudia fear this is another example of her being coerced into a public statement.

CPS has reportedly already been called on the Conways in the past but have failed to do anything about this situation.