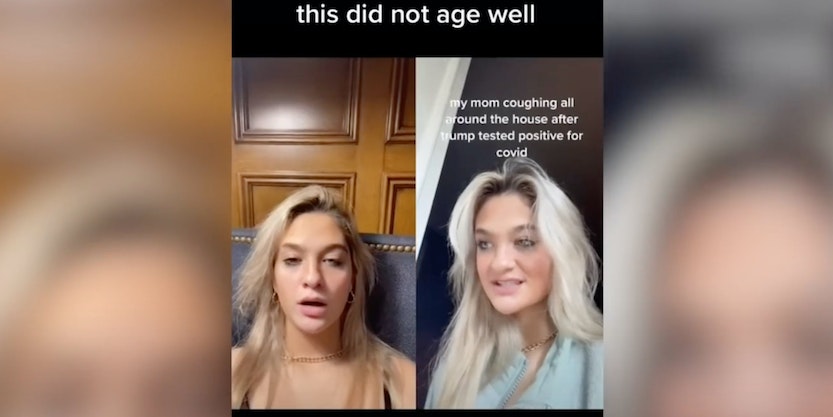 With news of President Donald Trump’s “recovery” from COVID-19 remaining on the front pages, and White House and Trump’s doctors providing conflicting reports about his condition, Claudia Conway has become the mole we never knew we needed.

She continues: “he is so ridiculous. apparently he is doing badly lol and they are doing what they can to stabilize him.”

The teen later posted a video in which she argues with Kellyanne, who can be heard accusing her daughter of causing “so much disruption” and cursing when she realizes she’s being filmed.

Claudia broke the news that Kellyanne contracted COVID last week on TikTok—and that she and her father George subsequently got the virus from her.

She’s also posted videos of her mother attempting to dictate the information she gives out on TikTok, including having her daughter issue retractions.

Claudia’s rise through the popular social media platform is indicative of the very reason President Trump has sought to end TikTok: it provides tremendous reach for his critics at zero cost.

“She’s an important political figure in her own right and has a bigger and more relevant audience than most mainstream journalists and broadcasters,” Penny CS Andrews, a doctoral researcher in information, media, and communication at the University of Sheffield, told Business Insider.

“At a time when people are searching for truth beyond the White House spin, her voice from the inside would be important anyway. But she has also been consistent in her views, and her followers and viewers know she is not just being controversial to upset her parents.”

And, boy, does she upset her mother. However, many on Twitter have celebrated Claudia’s efforts, including celebrities.