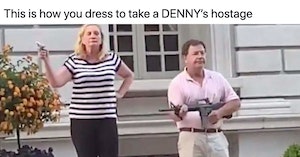 Things are a bit heated right now and apparently some people’s brains are literally starting to boil. Such was apparently the case in St. Louis, Missouri on Sunday when, during a protest that was apparently passing their house a couple of well-heeled homeowners decided it was a good idea to take to their front yards and wave some guns around, thereby turning a peaceful situation into a dangerous one.

A fellow lawyer from Missouri, a guy I know named Mark McCloskey committed an assault tonight in STL by pointing his AR 15 at peaceful protesters. He should be arrested and charged with assault immediately. The MO Bar should revoke their licenses. https://t.co/6N75iFLDtT

In doing so they also became the latest Karen—identified as Patricia and Mark McCloskey—to become instant internet memes. The preppy clothes, the outlandish firearms, the way the woman is holding her pistol like a baggy of dog poop. There’s just…so much here.

Here are some of the funniest “Ken and Karen” memes we could find.

what you think you’re gonna look like//what you actually look like pic.twitter.com/x8j163q5CS

This woman has mustard on her shirt pic.twitter.com/og1gXCids2

when antifa destroys all the buffalo wild wings and cheese factories in suburban midwest, this is their final boss pic.twitter.com/ACPstQ0cPh

I can’t believe they activated the Margaritaville National Guard. pic.twitter.com/szOeoqAefK

Protecting my home by barefootedly shooting my tiny husband in the head with a .22 pic.twitter.com/DixdI7w2HJ

This was the PERFECT opportunity to finally use their homme-debout and they missed it smh https://t.co/nKOGhpKEWt pic.twitter.com/34nm4XNQfv

How can we speak of debt
Let’s not haggle for darling Cosette pic.twitter.com/cgyBy2QtZ2

Good thing Halloween will be canceled because I’m already sick of this couples costume pic.twitter.com/Y4MjMhW7n6

It’s like Tarantino started working for The Hallmark Channel. pic.twitter.com/p52q5Gg4F9

Psyched for the True Lies remake where the lie is that they tip delivery people appropriately pic.twitter.com/RznfTqmKND

This woman holds a gun like it’s a used enema bag she’s trying to return at CVS for a full refund pic.twitter.com/YFjvZLS3Y7

this looks like a scene from a movie about two parents who get sucked into a television pic.twitter.com/dYuSZF9oeX

What the fuck are these two even defending? A good value on a used Honda? pic.twitter.com/ssgyC1fEEF

“We came here to live, laugh, and love and buddy, we’re out of all three.” pic.twitter.com/7iVIpruF1n

Say what you will about Ken and Karen, but this is some ride or die relationship goals shit. If you can’t seamlessly move from watching House Hunters to hopping off the porch with the strap, then I don’t want it pic.twitter.com/PlZZO3x2i2