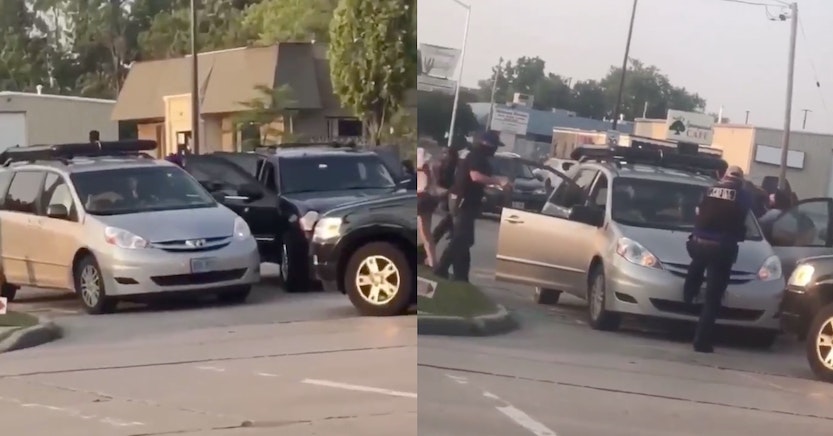 Cooks who were on their way to the protests over the police shooting of Jacob Blake in Kenosha, Washington, were allegedly “kidnapped by feds in unmarked vans” early Wednesday night.

Footage of the incident captured by someone nearby shows law enforcement in black vehicles surrounding a van at an intersection before breaking out the windows and pulling everyone outside. All the individuals in the van were then handcuffed and thrown into the unmarked police SUVs.

Riot Kitchen, a Seattle-based group dedicated to feeding activists and others in need, says the people arrested in the video were members of their group who were simply on their way to feed people protesting in Kenosha.

“Our ground crew only knew because we saw reports from police scanners about it and we hadn’t heard back from our crew in awhile,” someone from the organization told The Daily Dot on Thursday. “We had no idea who took them or where and it took until early morning hours for us to find any records of where they were taken.”

The Kenosha Police put out a statement saying that someone called to report “suspicious vehicles” including a school bus, a bread truck, and a minivan filling up canisters at a gas station, so they ambushed them under the assumption that they “were preparing for criminal activity.”

Some online are taking the police’s claim that they found “helmets, gas masks, protective vests, illegal fireworks, and suspected controlled substances” and face value, and as proof that the occupants of the vehicles were causing trouble.

Others, however, noted that most of these items are considered necessary protective gear in the face of police and militia violence that has been happening during protests across the country all year, but especially in the wake of the shooting earlier this week that left two protestors dead.

As for the gas, some say it is well-documented that Riot Kitchen uses gas generators and grills to cook food for the protestors.

Riot Kitchen member Jennifer Scheurle followed up late last night, confirming that they’ve managed to locate and bail out about half of the group members who were arrested.