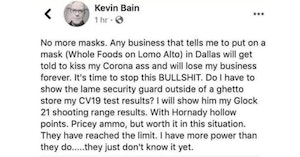 A man who went on an anti-mask Facebook rant got a rude awakening after his post caught the attention of his employer, leaving him without a job.

Kevin Bain was an employee of the Texas-based law firm Thompson & Knight LLP until he made the unfortunate decision to not only gripe on Facebook about his local Whole Foods’ mask requirement, but actually threaten store employees for enforcing it.

“No more masks,” he wrote. “Any business that tells me to put on a mask (Whole Foods on Lomo Alto) in Dallas will get told to kiss my Corona ass and will lose my business forever.”

If he had stopped there, Bain would likely still have a job. Instead, he escalated things.

“Do I have to show the lame security guard outside of a ghetto store my CV19 test results? I will show him my Glock 21 shooting range results,” he wrote. “They have reached the limit. I have more power than they do…..they just don’t know it yet.”

Unfortunately for Bain, his employers were somehow alerted to his threat, and immediately put forth a statement saying that he had not only been fired, but that they had alerted the authorities to his comments.

“[His] post is a complete violation of the values of our Firm, including our commitment to the health and safety of the communities we serve,” read a statement on the Thompson & Knight LLP Facebook page. “This type of post is not and never will be tolerated by our Firm.”

Bain’s original post was met with outrage and frustration online.

That someone would get so angry over being asked to wear a mask in order to protect other people that they would casually threaten gun violence was an astounding escalation of already inconsiderate anti-mask protesting.

He seems to be exactly the type of employee no one wants to deal with, especially during a pandemic.

Bain had apparently worked at Thompson & Knight LLP since 2009. Though now that he’s exposed his violent tendencies to the world, that might be the last law firm he works at for a good while.