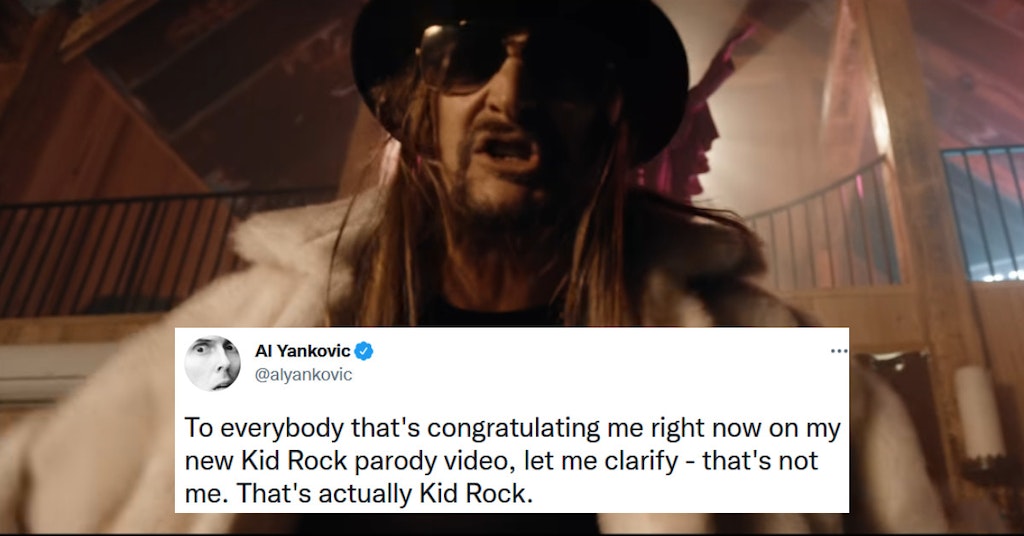 American songwriter and “rapper” Kid Rock apparently came to notice how irrelevant he’s become, without even Donald Trump around to kiss up to for headlines, so he’s come out with a new song that might break the world record for number of cringes per minute. The song, titled “Don’t Tell Me How To Live,” touches on pretty much every right-wing theme that the average 50-year-old conservative white man can come up with, including calling other people “snowflakes” while claiming to be “the last of a few still screaming ‘f— you.'”

The song also comes with a four-minute music video so that Kid Rock can show off all his hippest dance moves and have some random sweaty guy in a bar wearing a red hat that says “Make America Kid Rock Again.” Because he’s definitely not a special snowflake. It opens to him watching a pile of TV screens all with news anchors talking about him as though that is something that’s happened within the last 20 years, because he’s totally not an irrelevant hack.

The song at least starts out with some honestly, with Kid Rock calling himself “moonshine sipper straight slipping into darkness” (which would explain the dancing) and admitting that he’s “never been the smartest.” Then he goes on to try and convince himself, the audience, or both that it’s all okay because he’s such a tough guy in his white fur coat and designer shorts, talking about “backlash” as though anyone has mentioned Kid Rock at all in years and as though people didn’t hate him before Donald Trump came along.

But the real problem, raps Kid Rock, is the youngsters and their participation trophies (that nobody actually wanted or asked for), lamenting “a nation of p-ssies” and the fact that “every opinion has a millennial offended.” It’s basically a laundry list of decades-old Boomer whining about generations surpassing them in terms of public consciousness and basic human decency while they’d prefer to pretend they didn’t suck up all the resources for themselves and left the rest of us to deal with the fallout.

The final verse of the song is entirely Kid Rock attempting to convince someone or everyone that he’s still super tough and relevant, comparing himself to such figures as David Lee Roth, known liberal Bruce Springsteen, and perhaps most bizarrely, Brad Pitt. He’s also very concerned that we all understand that he, Kid Rock, is still having sex with many ladies, with his penis, definitely that is happening and he needs you to believe him as he rides a middle finger into outer space in his music video.

“A little less pretty but I sling more dick,” raps the kid of rock. “I twang more riffs, I slide through grass. I rip more lines than a ten pound bass. Pass the mic, I’m like sloe gin fizz.”

Kid Rock, real name Robert James Ritchie and also known as Bobby Shazam and who grew up rich far outside of Detroit, joined the ranks of insufferable right-wing celebrities who tried to jump on the Trump bandwagon for attention, but wasn’t creative enough to hold onto that for long. But at least for a day, he can enjoy his own preferred method of feeling special as everyone on the internet makes fun of him for his terrible, terrible song.