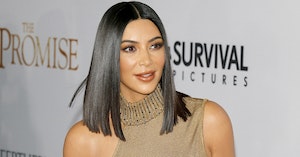 When Kim Kardashian wore Marilyn Monroe’s iconic dress to the Met Gala, people warned that there was no way that act wouldn’t be detrimental to something so important to fashion history, but the damage was already done. And now, we’re seeing firsthand just what that is.

The Marilyn Monroe Collection recently shared before and after photos of the dress, which the actress wore while serenading President John F. Kennedy for his birthday in 1962. The “before” picture shows the dress in excellent condition despite its age, whereas the “after” shows a wealth of damage, including missing crystals and significant wear and tear along the zipper line — particularly of note since Kim was somewhat cavalier about her struggles fitting into the dress in the first place.

The “after” picture was taken where the dress is currently on display at Ripley’s Believe It or Not in Hollywood. It isn’t immediately clear when the “before” is from, although it may have been taken from a 2016 video subsequently shared by the same Instagram account.

Regardless, it’s apparent severe damage has been done at some point in the past several years despite the dress previously going decades without that kind of degradation, and Kim’s wearing it out for a walk down the carpet seems more likely to have done the job than it being on display and carefully looked after.

Photographer and costume maker Sarah McGonagall posted a lengthy thread about fashion preservation in response to the photos, saying, in part, “This is a truly impressive amount of damage that can now never be undone, and will only worsen over time. The whole thing is going to end up falling apart eventually, so much sooner than it ever would have otherwise.”

“Museums have a strict code of ethics that they have to adhere to with the artifacts. They will not allow any use that risks the item’s integrity,” she added. “But because Ripley’s is privately owned, they don’t have to follow these rules, and that’s how unfortunate things like this happen.”

She was far from the only person outraged at the completely unnecessary damage done to the dress just for a reality star’s vanity.

“I’m extremely respectful to the dress and what it means to American history,” Kardashian insisted at the time. “I would never want to sit in it or eat in it or have any risk of any damage to it and I won’t be wearing the kind of body makeup I usually do.”

Unfortunately, in this case, true respect to avoid damage would have looked like never wearing it at all.