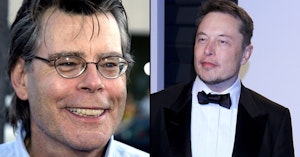 The famed author first drew Musk’s attention by denouncing the proposed $20 per month price for Twitter verification, prompting the social media platform’s new owner to offer up a price of $8 per month for something that used to — and should be — free.

The idea of paying for a verified identity, which is slated to be implemented any day now, has been the latest deeply controversial move by Musk, as being verified has always been intended to cut down on misinformation and impersonation, rather than a privilege anyone can pay for.

But Musk insists it’s a necessity in order for Twitter to be able to pay the bills. His critics, in turn, say he’s put himself in this position by overpaying for the platform as well as making advertisers so nervous that they have pulled out of buying up space, without a clear plan for combatting hate speech and other issues in place.

With this in mind, King made the clever choice to compare Musk to a well-known literary figure pulling one of his most famous antics.

Although Musk fanboys fell over themselves defending him as they always do, many others appreciated King’s apt comparison.

Some people also tried valiantly to explain some common sense things to those defending Musk’s plan, including how Twitter benefits from having people like King stay on it, and that it isn’t that folks have a problem with forking over $8, but that they are taking a principled stand about what it means for the platform itself.

There’s a reason other platforms like Instagram and YouTube and TikTok have made deals with their creators over the years and paid them for content rather than demanding to be paid for that content to be prioritized in the algorithms. The content is the money maker. If Musk can’t draw in advertisers to pay for it, then there are other problems going on — ones that won’t be solved by $8 per month.