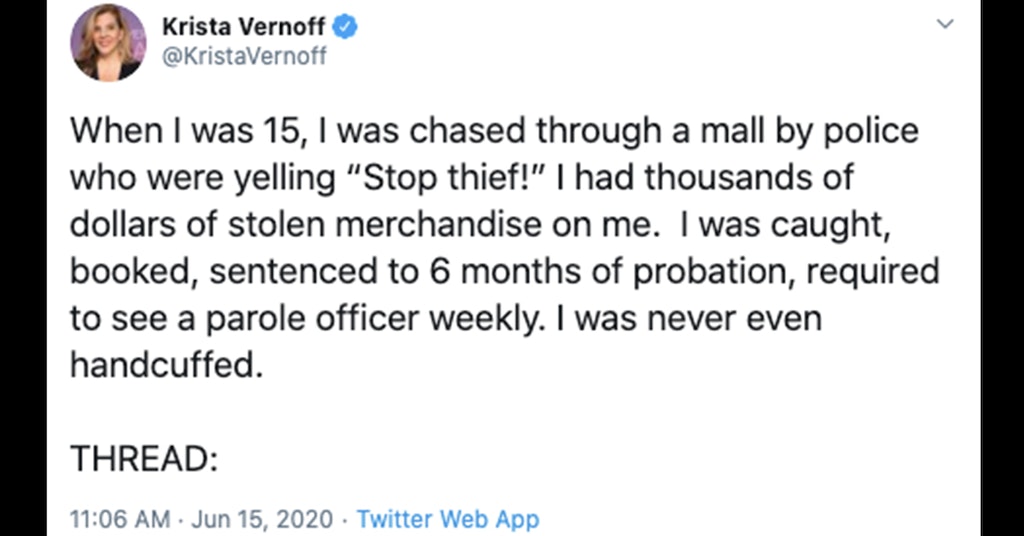 It would seem America is finally waking up to this mistreatment of Black people at the hands of police. While this kind of racism and injustice has been going on for…ever, the protests launched by the killing of George Floyd at the hands of Minneapolis police seem to have finally forced enough white people to pay attention that the outrage hasn’t just quietly died out in a couple of days.

And though the brutal treatment of protestors by law enforcement has certainly driven home the need for reform, the difference between how Black people and white people have been treated by police over the years has always served to highlight the deeply ingrained racism in the police force, as well as the country in general.

Grey’s Anatomy showrunner Krista Vernoff took to Twitter this week to share a long string of run-ins she, as a white woman, has had with police over the years. Not only is she still alive, when Black people have been killed for far less, but she has no criminal record and has gone on to have a successful career and life. In other words, despite doing the same sorts of things that have ruined Black people’s lives, she has thrived.

“When I was 15, I was chased through a mall by police who were yelling ‘Stop thief!’” she begins. “I had thousands of dollars of stolen merchandise on me. I was caught, booked, sentenced to 6 months of probation, required to see a parole officer weekly. I was never even handcuffed.”

When I was 15, I was chased through a mall by police who were yelling “Stop thief!” I had thousands of dollars of stolen merchandise on me. I was caught, booked, sentenced to 6 months of probation, required to see a parole officer weekly. I was never even handcuffed.

Vernoff goes on to detail more crimes she committed, including drunk driving…

The officer laughed then asked my friends to blow and when one of them came up sober enough to drive, he let me move to the passenger seat of my car and go home with just a verbal warning.

When I was 19, I got angry at a girl for flirting with my sister’s boyfriend and drunkenly attacked her in the middle of a party. I swung a gallon jug of water, full force, at her head. The police were never called.

The cop pulled me aside and said, “You don’t punch people in front of cops,” then laughed and said that if I ever joined the police force he’d like to have me as a partner. I was sent into my apartment and told to stay there.

And these weren’t the only incidents, either.

Vernoff adds that she and her friends were caught drinking or doing drugs on multiple occasions when she was young, but police didn’t arrest them, and certainly did not kill them.

Between the ages of 11 and 22, my friends and I were chased and/or admonished by police on several occasions for drinking or doing illegal drugs on private property or in public. I have no criminal record.

People love to make excuses for police who shoot Black people for non-violent things like fleeing from them.

But the cops don’t seem to have that same kind of “my life is in danger from this person running away from me” energy when it comes to white criminals.

I’m asking the white people reading this to think about the crimes you’ve committed. (Note: You don't call them crimes. You and your parents call them mistakes.) Think of all the mistakes you’ve made that you were allowed to survive.

And this is why, she says, the police need to be defunded.

The system that lets me live and murders Rayshard Brooks is a broken system that must change. Stop defending it. Demand the change. #BlackLivesMatter #WhitePrivilege #DefundPolice

The inequalities just jump right out.

And I said yup that really says it all.

I confess: this thread felt like humble bragging about white privilege at first, but it ended somewhere powerful. It’s time for us to admit that the ways we use the words “crime” and “criminal” have much less to do with forbidden conduct than the race of the person who did them.

THIS IS THE BEST, AND MOST HONEST, ACCURATE DESCRIPTION OF WHITE PRIVILEGE I HAVE EVER READ. We all know it too.

And plenty of white people had similar stories to Vernoff’s

Trying to explain what it was. Cops yelled “GUN” and “let me see everyone’s hands!” so we all put our hands up. Both cops put their hands near their guns but never unclipped their holsters. If I were black I don’t believe I’d be here today.

But falling asleep in your car (while black,) carries a death sentence.

Correction: One pull-over was not for speeding. A cop saw me & another white friend get out of the car at a stop light and do a celebration dance in front of white friends in the car behind me who we just beat in a dangerous race.

Just as Black people had tales that put police bias on display.

Same. No crimes or “mistakes” to speak of. Pulled over for traffic violation & cop was aggressive with hand on gun. Once pulled over w/ son (13yo at time but 6ft tall) 2 cops. 1 on his side to the rear w/ gun out while one talked to me aggressively. Cried I was so mad & scared.

This was why my parents were so nervous when I hung out with my white friends. They were afraid I'd get caught up doing some prank or something stupid and end up taking the brunt of the punishment.

At my high school, a black alumnus was shot & killed by the police. During the school assembly to discuss feelings 1 of the biggest coke heads (white…it was a rich prep school) said unironically, not rhetorically, and with no awareness of self: "but didn't he have weed on him?"

I'm black & used to be neutral towards cops until they started profiling me. I was arrested for merely sitting inside of my parked car, they frisked me (felt like molestation), and even violated my 4A rights by going through my car. It happened so many times I filed complaints.

When my interracial son was 16 he was driving his dad’s car with a friend. They were pulled over told to get out of the car at gunpoint and made to lie down on the pavement. They were accused of stealing the car. The address on his license was the same as the registration.

Whether you think the system is broken or that it’s always been intended to work against Black people and people of color and is, therefore, working just fine, one thing’s for sure — whatever this is, it’s not right.