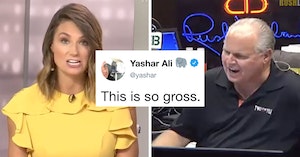 The former MSNBC host and current Hill TV host explained on her show that she was struggling with how to deal with Limbaugh’s accusation and wanted to set the record straight.

Ball unequivocally asserted that she did not pose nude when she was 14 or 15. “Facebook and MySpace did not even exist when I was 14 or 15. I didn’t tweet anything related to that,” she added.

She also noted that Limbaugh was probably referencing a photograph of Ball and her then-husband at a holiday party wearing sexy costumes and felt he had to make the story more “salacious in order to titillate his audience.” The old photographs were published by a right-wing blog during her 2010 congressional campaign.

Ball followed up her remarks with accompanying tweets.

So I have some sort of weird personal/public news. The other day on his show, Rush Limbaugh went on at length about how I posed nude when I was 14 or 15 (I did not.) I've been thinking for a few days about how to deal with this. Partly I didn't really want to call more attention.

“I didn’t want this slut-shaming smear just hanging out there.”

“Most importantly, though, if I did ‘pose nude’ at 14, so fucking what? Should women be barred from public service because they have bodies and sexuality?”

Ball is obviously right—women shouldn’t be shamed or refused public service because they posed nude.

Read this whole thread from @krystalball. I want to lift this up because not only has #RushLbaugh lied…once again…just stop shaming women, especially young women and girls if they do choose to show themselves. Their full selves. #Shame on the shamers. https://t.co/IEkjDKkZpD

Her stance on Limbaugh’s misogynistic ramblings will hopefully encourage others to stand up for themselves and support other women being shamed.

This incident is reminding people that Rush Limbaugh defended Melania Trump’s nude modeling photos, calling them “relatable.” And—while Melania Trump is complicit in her husband’s atrocious presidency, her posing nude has nothing to do with that complicity or the harm she has done. In other words, you can criticize her without bringing up her nude photos.

Also, isn’t it weird of Limbaugh to make up a story that theoretically involves him looking at naked pictures of an underaged girl?

So long as Limbaugh is slut-shaming based on false information, it's only fair that to point out the time he was detained with a mis-labeled bottle of Viagra after returning from a country known to be a destination for high-end escorts and sex tourism. https://t.co/gsj0maHWBi

Maybe someone should get on that?