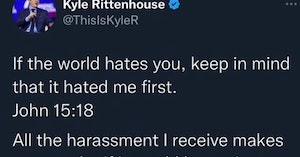 Kyle Rittenhouse is continuing to lean in hard to the martyrdom complex his rightwing supporters have created for him, now comparing himself to none other than Jesus Christ.

The teen tweeted out a Bible verse recently: “If the world hates you, keep in mind that it hated me first. John 15:18.”

“All the harassment I receive makes me wonder if it would be easier to stay quiet about my values and beliefs,” he continued. “But then I remember that God sent His Son Jesus. who experienced the hatred of the world first.”

In the Christian Bible, Jesus was persecuted for saying he was the son of god and going around performing miracles to help people.

In the verse, he is telling his followers to expect hatred from society for believing in him.

Rittenhouse, however, is only known to and hated by the world for crossing state lines, getting an AR-style rifle, killing two protestors, and somehow getting away with it all.

Even for those who believe Rittenhouse acted in self-defense (against two unarmed men), the comparison to a man known for refusing to act in violence against his oppressors as they murdered him makes absolutely zero sense.

Because to be clear, anyone giving Rittenhouse grief is doing so over his actions, both in Kenosha and as they have continued ever since — like how he recently decided to capitalize on his reputation for shooting and killing people conservatives don’t like by releasing a “Turkey Shoot Game,” where the user pretends to be Kyle as they kill turkeys with labels like “Fake News” and “MSDNC” to “own the libs.”

People pushed back against his victimhood on Twitter, although it undoubtedly just served to increase his martyr complex.

Rittenhouse might have an easier time if he stopped trying to capitalize off his killings and controversies and going out of his way to provoke people with different political beliefs with stupid video games. But if doing the smart thing was in his wheelhouse, he never would have been in Kenosha and nobody would have ever come to know who Kyle Rittenhouse is in the first place.