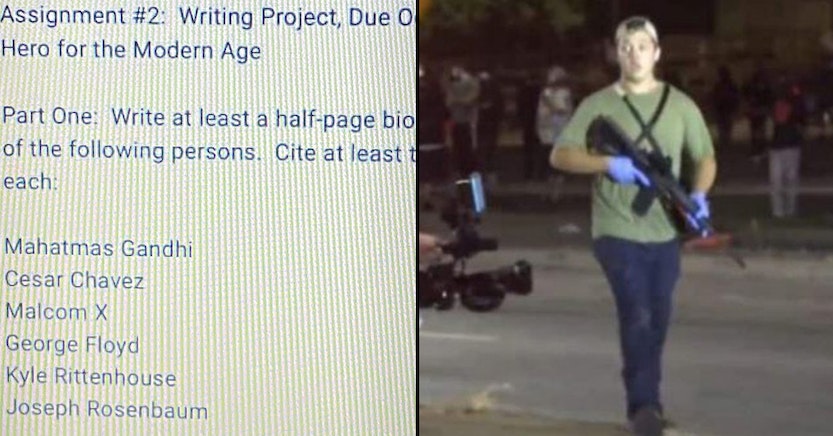 A Texas school is coming under fire after asking students to write an essay about a modern-day hero and one of the options was the Kenosha shooter, Kyle Rittenhouse. In the two-part assignment, the first part consisted of writing a short, half-page biography, and the second part asked the students to write an essay on someone who they felt “demonstrated the concept of a hero.”

The list of people who the students could choose from included historical figures like Malcolm X, Cesar Chavez, Mahatma Gandhi, George Floyd, and Joseph Rosenbaum. The last being Rittenhouse, the 17-year-old vigilante who shot and killed two protesters in August. Rosenbaum was the last person listed on the assignment—he was the man who was shot and killed by Rittenhouse.

It’s the ⁦@dallasschools⁩ assignment that has people across the country now asking questions. Accused #Kenosha killer among list of “heroes” for an English assignment. Defenders say it’s about “critical thinking”, others call it flat out racist, and wrong ⁦@CBSDFW⁩ pic.twitter.com/JnluETK3Br

The teacher seems also to have misspelled the names of Gandhi and Malcolm X.

As the test began to circulate around the internet, people gave their thoughts on the test. Any educator who would list the last 3 on any assignment right now really needs to be thinking about their thought process as an instructor. Just why,” one Twitter user commented.

Another person simply tweeted, “Idiocracy” was too kind.”

One of the students who was given the test had their sister go on local television to talk about the assignment. “It was just like, ‘Oh my gosh, the spelling,’ ‘Oh my gosh, there are no women on here,’ and then very ardently the fact that a White supremacist murderer’s name is on a list with important historical figures,” she told the station.

According to the Daily Kos, the teacher was identified as “an English teacher at W.T. White High School” and is currently being investigated over the assignment.