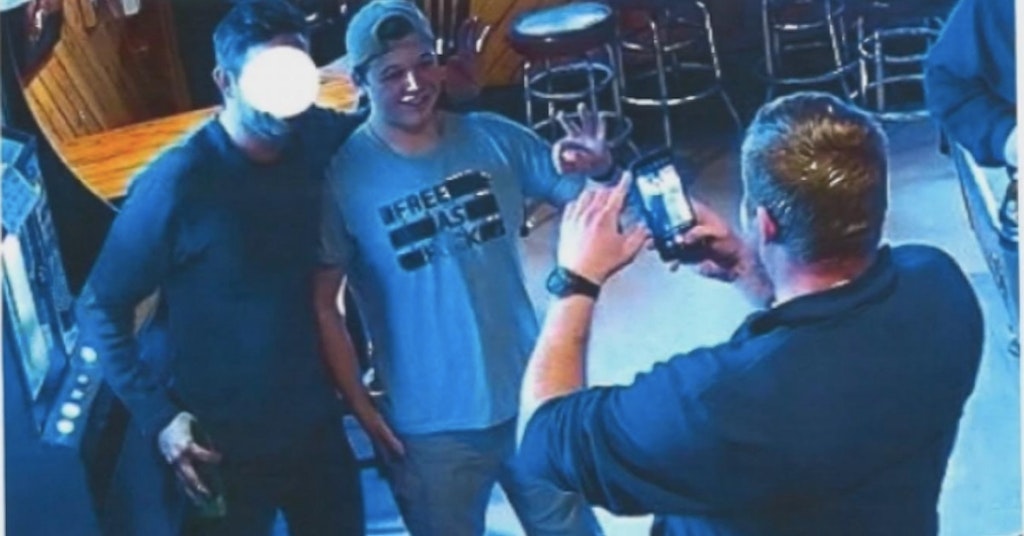 Kyle Rittenhouse was charged with shooting and killing two people at the Black Lives Matter protests in Kenosha, Wisconsin, last summer and injuring a third. His bail was set at $2 million, but he got out when 2nd Amendment activists crowdfunded the money.

Now, prosecutors are seeking to change the terms of his bond agreement after seeing what Rittenhouse is getting up to while out on the town.

Photos of Rittenhouse buddying around with members of white supremacist hate group the Proud Boys have surfaced, NBC News reports.

The images were taken off security footage from local watering hole Pudgy’s Bar. They should Rittenhouse wearing a t-shirt that reads “free as f-ck,” and flashing the “OK” white power hand gesture. He was reportedly “loudly serenaded” by the Proud Boys in the bar.

The Kenosha County District Attorney’s Office has asked in a motion that from now on Rittenhouse be prohibited from drinking alcohol, or entering a bar.

Underage patrons are technically allowed in a bar in the company of their parents, and the 18-year-old was accompanied by his mother the night the footage was taken. They went there shortly after Rittenhouse plead not guilty to the shootings in court.

The motion would also prohibit Rittenhouse from publicly displaying any “white power” signs or having any contact with members of violent or white supremacist organizations. The Southern Poverty Law Center, which identifies hate groups in the U.S., has identified the Proud Boys as such.

If the change to Rittenhouse’s bond goes through, he won’t be having any more celebratory nights out on the town. He is due back in court in early March.