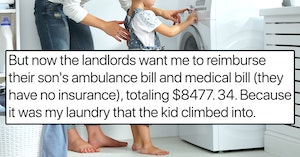 Landlord’s Kid Jumped Into A Running Dryer, Now They Want Tenant To Pay Over $8k For His Medical Bills

A tenant recently took to Reddit to ask “AITA” after their landlord’s son snuck into the laundry room and had to be rushed to the hospital after climbing into the dryer while it was still running — and the landlords blamed the tenant and demanded they pay the medical fees.

They continued, “I had my clothes drying in the laundry room. All of a sudden I hear yelling from the wife and next thing I know, ambulance has arrived. I soon learn that: Apparently their 4 year old opened up the dryer and climbed in.”

With a normal dryer, this wouldn’t matter so much, but OP said the landlord’s “dryer was faulty.. it doesn’t shut off when you open the door. Yea…. So the kid was tumbling in there while the door was open and all because the machine didn’t shut itself off when the door was opened.”

The child was luckily not badly injured and the tenant thought that was the end of it, only to find that their landlords want them to reimburse them the costs of the ambulance ride and medical bill because they don’t have insurance.

The bills totaled at $8477.34, and the landlords claimed the tenant was responsible for them “because it was my laundry that the kid climbed into.”

OP took to a landlord-oriented forum to ask their opinions, but given the vacuum chamber of responses, they said the tenant should pay up the money to their landlords to be “morally fair” to them because they hadn’t raised rent on the tenant when the lease was up.

The tenant then edited their post to add clarifications to their post, including everything from responding to people surprised they only did laundry once a week to saying they would be consulting with a lawyer about next steps, but that it was likely the landlords would drop it.

Commenters declared the OP NTA, with many saying that it was the landlords’ responsibility to watch their child and that the tenant should lawyer up fast.