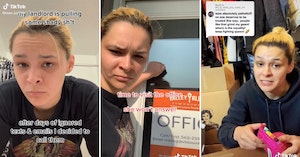 A young woman may be getting a new home after her TikTok videos showing how a real estate company attempting to ghost her into an eviction that was never explained, even refusing payment when the tenants offered it.

The entire story exposes some shady practices that may well land the company in court, but not before terrorizing a couple who did everything they could to be good tenants but who just happen to both be women in a romantic relationship with one another.

There might not be a way to prove that homophobia was involved, but the story’s background has left people with some heavy suspicions. It started when the couple’s previous town home manager, also a lesbian, left the company after warning TikTok user Justine and her partner that some trouble might be coming their way. Then they got a notice claiming that their month-to-month lease was being terminated — but their lease was for a full year.

Justine recorded her initial video on the topic, which now has over 1.1 million views, while clearly upset and shaking, explaining that after they got the strange eviction notice, their new manager actively tried to ghost them. The tenant shows her attempting to call only to be hung up on, and then her knocking on the manager’s office door and ringing the bell, but getting ignored.

Then she got another letter claiming that the eviction was due to non-payment of the security deposit, which was also inaccurate. Justine says that she and her partner paid a deposit upon signing the lease as usual, but then the company demanded another deposit, which is already shady. They were only able to pay half of this suspicious extra deposit at the time due to COVID-19, but arranged with the previous manager to pay the rest once they received COVID relief funds.

When they got this notice, Justine and her partner attempted to offer payment for the rest of the deposit, but their online account was locked and with the new manager ghosting them, couldn’t even hand over a physical check for the amount they wanted.

“I said, ‘Sure, we’ll pay off the remainder of our deposit, but that means you won’t terminate our lease, right?'” Justine says in the TikTok. “And she won’t answer me.”

The women filmed themselves explaining all of this to one of the owners after they tracked down the corporate office and went there in person to explain everything.

Justine explained to the Daily Dot that she believes this is an act of discrimination against a queer couple as well as retaliation at the request of her abusive ex-husband, who has some connection to the company’s owners. She said she would be filing a complaint with the Iowa Civil Rights Commission based on the evidence she’s gathered, and in other TikTok videos says she’s received legal counsel and is prepared to go to court.

“We will also be filing a lawsuit for the thousands of dollars this is going to cost us,” she said.

The good news is that her story going viral has inspired people to help, and in another recent video in which she can be seen packing her things says that the attention resulted in an opportunity to buy a full house in the area. Not only will this protect her and her partner from landlord crap like this, she says it will help with her child custody case, and she says that this is all possible because of donations from people who watched her videos.

Her fans are happy to learn that things are looking up.

“Blessing in disguise hopefully everything works out for you AND you get them in trouble for the bs they put you through,” wrote a commenter. “Hope they don’t try it again.”

“You’re such a Rock and we are glad this situation has turned to your favor,” said another.