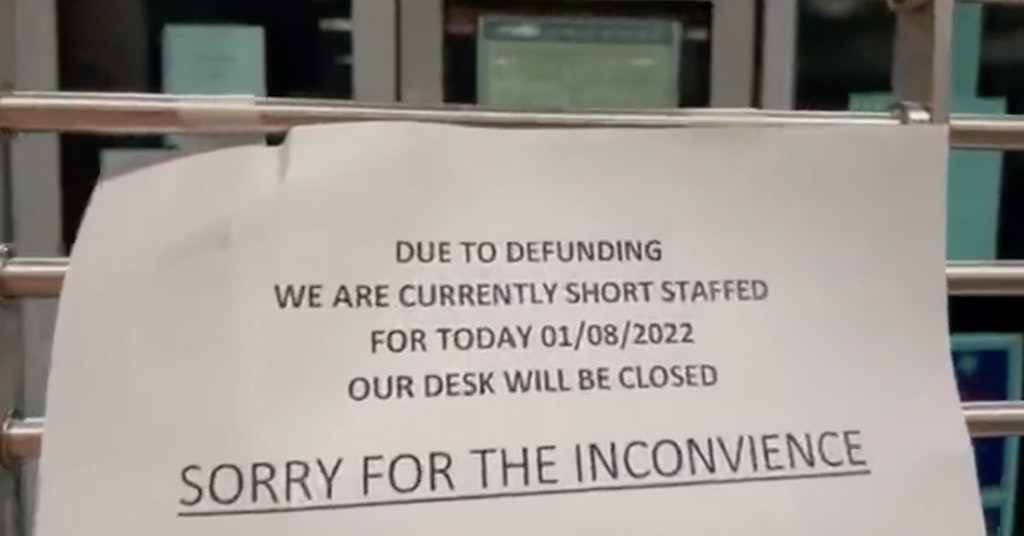 Twitter is tearing apart the Los Angeles Police Department (LAPD) for claiming a station was closed due to defunding, leaving a sign up on the precinct door apologizing for the “inconvenience.” It is suspected that the real reason the station had to shutter its doors this week was because too many officers were out with COVID-19, particularly since the LAPD budget increased this year, the Daily Dot reports, despite the many protests against police brutality and militarization during 2020.

The viral tweet on the closed station was shared by @FilmThePoliceLA, who filmed a sign reportedly posted on the LAPD’s Wilshire door.

It reads, “Due to defunding we are currently short-staffed.”

The LAPD did confirm that the station is closed temporarily, telling the Daily Dot in an email on Thursday, “The station front desk was closed until the afternoon due to a shortage of personnel.”

Film the Police LA, which is run by William Gude, shared a correspondence with LAPD Chief Moore and the LAPD Commission in which Moore claims that the sign was posted by some other party, not someone who is associated with the department, in an effort to make them look bad.

“I’ve directed an immediate inspection of the door as well as review of any CCTV coverage of the door in an effort to identify who is responsible,” Moore’s email read, saying it was probably put there “in an effort to embarrass us.”

L.A. Taco reports that a department spokesperson said, “It was determined that an officer placed the sign and a complaint has been initiated.”

In 2020, the LAPD did have their budget cut by $150 million in response to protests, but a third of that was restored by overtime costs. This year, LAist reports that the city increased the LAPD budget by $41 million, bringing them to a total of $1.76 billion. They are asking for an additional $213 million for the next budget.