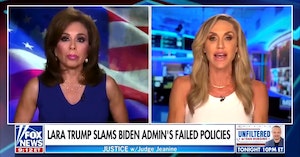 Lara Trump, wife of Eric and daughter-in-law of the former president, went on Fox News over the weekend to stir up some fear about refugees and other migrants coming to the U.S. through the Southern border in order to attack the Biden administration.

While attacking Biden’s border policies, Trump appeared to suggest that vigilante violence — with guns, of course — would be needed, if not an entire army of gun-toting Trump supporters against what Lara is trying to paint as some kind of organized army of desperate folks walking to the U.S. from Guatemala.

“I don’t know what you tell the people who live at the southern border,” said Lara Trump in a clip now spreading across Twitter. “I guess they better arm up and get guns and be ready, and maybe they’re going to have to start taking matters into their hands.”

Lara is apparently a “Fox News contributor” according to the longer clip posted by host Jeanine Pirro, brought on whenever somebody needs to angrily attack the new administration. On Saturday, they had her on to go after Vice President Kamala Harris and act as though her telling the people of Guatemala, suffering under poverty and violence fueled by U.S. drug markets, not to come to the border because they would be turned back, was not cruel enough.

Both Pirro and Trump are still stuck on this idea that Harris needs to visit the Southern border as though doing so would be anything more than a show that did nothing to alleviate the underlying problems sending people fleeing to the U.S. or the issue of overcrowding in migrant detention centers. Children are still being kept in cages in unacceptable conditions, and it will take real work, not publicity stunts, to help them.

Regardless of Lara Trump getting paid to be outraged at full volume, she seemed to agree with Harris in the end that migrants should not come.

“It should never happen, these people should never make this dangerous journey here,” she said after telling her dad’s supporters to get ready to murder refugees. “It’s bad for Americans, it’s bad for the migrants, it’s bad all around.”

This would not be the first time that a Trump recommended the mass murder of desperate people fleeing conditions created by the U.S. in order to “deal with” the supposed problem of their entry into the country. In 2019, then-president Donald Trump made the incredible remark that mowing migrants down with machine guns is a great way to handle the problem.

“We need to defend our country. People pouring in. I mean they are pouring,” Trump said to Sean Hannity. “Now we’re capturing these people. We’re getting them. But, you know, we don’t do like other countries. Other countries stand there with machine guns ready to fire. We can’t do that and I wouldn’t want to do that, OK? It’s a very effective way of doing it and I wouldn’t want to do it, we can’t do it.”

It sure sounded then like Trump wanted do do it, and many Twitter users feel that it sure sounds now like Lara Trump wants the same.