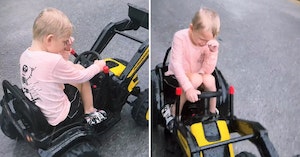 Good parenting doesn’t seem to run in the Trump family, evidenced yet further by an Instagram video recently posted by Lara Trump that has viewers equal parts confused and concerned for her five-year-old child.

In something Lara called “character building,” she apparently allowed or encouraged her young son to drive a miniature bulldozer in the pouring rain during a lull in the incredibly destructive storm that was Hurricane Ian.

The kid appears to either be crying or just wiping or trying to keep all the rain out of his eyes, but either way he does not seem like he’s enjoying himself.

“Thought we had a clear window, turns out we did some character building instead,” the caption reads, “stay safe everyone!”

“You can do it, let’s go!” she shouts after her child says something in audible.

People are often not fans of parents who seem to want to capitalize on their children’s discomfort or anguish for social media attention, and people are also often not fans of the Trump family. The resulting crossover has resulted in a lot of criticism, with comments calling the video’s content everything from bizarre to child torture.

Considering how intense Hurricane Ian was, folks have also expressed concern for the kid’s safety. It may just be rain during what Lara calls a “clear window,” but hurricane conditions can change rapidly and the high winds present a serious danger to kids who look like they could be blown away by a light breeze. Even if it wasn’t raining when they left, this was at best an unnecessarily risky venture.

Calling any of this “character building” was also not received well. Conservatives have been known to dismiss potentially dangerous or traumatic experiences in childhood by using this vague and essentially meaningless term while seeming to have no shred of character themselves.

Lara and her children live in Florida with Eric Trump, one of the least-loved of Donald Trump’s children. They apparently remained in their residence as Hurricane Ian, a fierce Category four storm, pummeled the state with winds reaching as high as 155 MPH. Its death toll has now passed 100 people and hundreds of thousands of homes and businesses remain without power. Some places were destroyed so thoroughly that some are wondering if it’s worth it to try and rebuild.

In light of this devastating news, the post seems insensitive on top of everything else, and it’s currently being slammed on Twitter, with some referring to it as child abuse and calling for Child Protective Services to intervene.