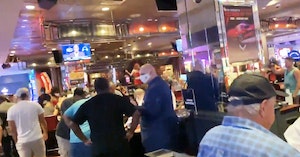 When Las Vegas reopened at exactly 12:01 a.m. on Thursday, June 4, people flocked to casinos en masse—surprising even local tourism officials and casino executives, since COVID-19 cases are still on the rise throughout much of the country. CNN described the vibe as “electric,” with gamblers cheering as they entered the reopened casino doors.

And the crowds stuck. Noel Bowman, owner of ICEBAR at The LINQ Promenade, said that on the first night back in business his team had anticipated a 10 p.m. closing time, but ended up staying open to 2 a.m. to accommodate guests. “We were unexpectedly slammed with heavy traffic and guests ready to spend money,” he explained.

The clock has hit midnight in Las Vegas! Here’s the crowd waiting to get into @theDlasvegas in #DTLV. ???? pic.twitter.com/sp6gNwsVPz

Local reporters have also been on the scene, such as Los Angeles Times sports columnist Arash Markazi, who tweeted a video documenting the madness. “Las Vegas is officially back,” he wrote.

Las Vegas is officially back. pic.twitter.com/EI3nXs2e5w

Las Vegas Review-Journal reporter Mick Akers was also there for the reopening, capturing the crowds of people packed onto the casino floors and at slot machines, sitting practically right on top of one another.

People did not waste any time at The D. Gaming floor is packed. #vegas #dtlv #reopenvegas pic.twitter.com/8GnHzGs1hM

A casino floor man trying his best to get people to social distance who aren’t in the same group in line for the cashier. #vegas #dtlv #reopenvegas pic.twitter.com/sbeigj4aZl

Just about every seat at the Long Bar at The D is occupied. #vegas #dtlv #reopenvegas pic.twitter.com/EaxdnKfOjI

Temperatures of guests are being taken via wrist scan as people enter the D. #vegas #dtlv #reopenvegas pic.twitter.com/n49yNaJHo5

Going off the eye test about 15-20% of customers are wearing masks at The D. #vegas #dtlv #reopenvegas pic.twitter.com/degpH0tEhB

There are hand sanitizer stations located in all areas of the casino floor and bars at The D. Also at every entrance. #vegas #dtlv #reopenvegas pic.twitter.com/pVUEnFqPU0

Some a slot games have players at almost every seat, without spacing. #vegas #dtlv #reopenvegas pic.twitter.com/BW2wdkRw1p

And then there was this absolute gem that went viral when shared by retired basketball player Rex Chapman, which shows a dude literally pulling aside his mask so he could smoke a cigarette, and then pulling it down again to blow out the smoke. “Las Vegas is back, baby!” Chapman tweeted. He’s not wrong!

Even Scott Roeben, who owns the travel blog VitalVegas.com, was somewhat gobsmacked at the sheer number of people who showed up to gamble in the middle of a pandemic.

“Vegas is all about our guests being carefree, but in the initial days of reopening, it feels like there may be too much ‘free’ and too little ‘care,'” Roeben said. “People aren’t being reckless; they just aren’t as paranoid as I’d expected.”

But when even Wisconsin saw packed bars during the state’s reopening, maybe he shouldn’t be so shocked. And unfortunately, when it comes to potentially deadly, extremely contagious viruses, what happens in Vegas certainly does not stay in Vegas.